Castle at Caen – William the Conqueror

What is Caen castle?

This is the castle that William the Conqueror built before he left to conquer England, to defend his own territory in Normandy, in France. 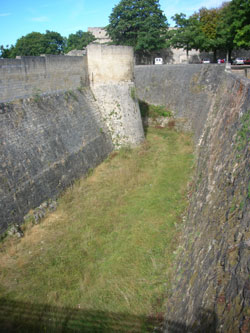 The moat around Caen Castle

Does it have a moat?

Like other medieval castles, the Caen castle had a moat around it. The moat was very deep so that enemies could not batter down the walls on the other side. If they climbed down into the moat, it would be easy to shoot them with arrows or drop rocks on them to kill them. 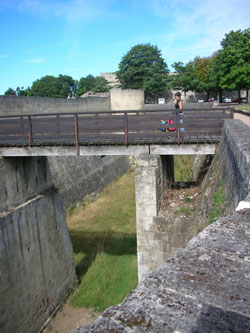 Drawbridge across the moat – Caen Castle

The only way you could get into the castle was by crossing the moat on a wooden drawbridge. Here is a picture of one of the drawbridges (this was such a big castle that there were a lot of drawbridges).

Does it have a portcullis? 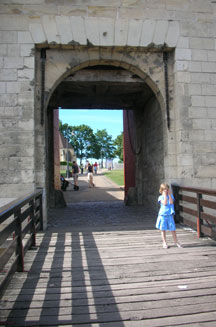 Moat and drawbridge at Caen

When enemies came, the people in the castle pulled up the drawbridge so nobody could get in. When you went over the drawbridge, you also went through a big strong wooden door, with an iron gate called a portcullis in front of it. The portcullis is gone now, but you can still see the slots carved in the stone wall for the portcullis to slide up and down.

What if enemies got through the portcullis?

If enemies did get through the portcullis, they would still be in the little hallway you can see in the back, trying to break down the wooden door on the other side. People inside the castle could drop rocks and pour boiling water on them through holes in the ceiling. 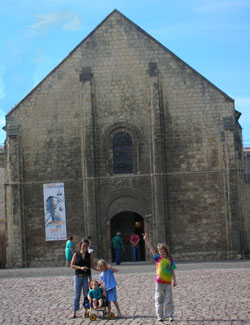 Inside the walls of Caen castle

Once you were inside the walls, you would see a lot of buildings that were used for different things: barns, toolsheds, chicken coops, houses for people to live in, meeting halls and courthouses, big halls for people to eat in, and many workshops for carpenters, weavers, and so on.

This building is a meeting hall that was mainly used for people to come pay their taxes or to discuss money questions with William’s treasurer.

Watch a movie about juggling inside the castle!

Medieval castles and the Islamic Empire

This castle, and other ones that people built in Europe about this time, look a lot like the castles and city walls people were building in the Islamic Empire. Compare William’s castle to the walls of Cairo, in Egypt, built about the same time.