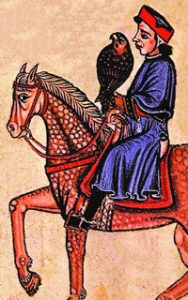 Like his father and grandfather, he was very successful. But he cared mostly about Italy, and not Germany. He let the lords in Germany do whatever they wanted. After Frederick II died, from 1254 to 1273 AD, there was no Holy Roman Emperor.

After this gap, new emperors took charge. But they never got back the power of the earlier emperors. Now the Holy Roman Empire had pretty much given up on controlling Italy. Instead, Italy operated as a group of independent city-states like Florence and Genoa, when it wasn’t under the control of Robert the Wise. By 1338 AD, the Holy Roman Emperors had even lost the power to choose their own successors. Instead, a group of rich men, the Electors, met to elect an emperor.

Unlike in the earlier Holy Roman Empire, now these Electors didn’t let any women get into power. These Electors soon realized that they didn’t want to elect any strong rulers. Strong rulers would just push them around. But as long as they picked weak Emperors, the Electors could run things themselves. So that’s what they did.

Gradually local rulers formed their own governments that collected taxes, minted money, and ran their own court systems. Many of the Holy Roman Emperors stayed mainly on their own personal land, leaving the rest of their empire to run itself.

The Black Death, a plague which killed about a third of the people in the Holy Roman Empire in the years after 1350 AD, also made Germany poorer than it had been before. Because German Christians blamed the Jews for the plague and attacked them, many Jews moved to Poland, taking their money with them.

The Holy Roman Empire also found itself ringed by more powerful states – Poland, Hungary, and France especially – that it could not fight effectively.

In 1385, the Holy Roman Emperor’s son, Sigismund, married Mary, the ruler of Hungary. Sigismund used Hungary’s power to become Holy Roman Emperor himself in 1414. Around this time, blacksmiths in Northern Germany learned how to build Chinese-style blast furnaces. Blacksmiths in Germany began to make better quality steel and sell it. People in Europe could buy their steel closer to home. Germany got richer selling all this steel.

Frederick III and the Habsburgs

By 1440, the tide changed. The Electors elected Frederick III, a member of the Habsburg family, and he proved to be stronger than they thought he would be. He was able to get his son elected after him, and most Holy Roman Emperors were from the Habsburg family from then on. He also conquered western Hungary.

Finally, in 1508 Frederick’s son Maximilian I decided not to bother making the dangerous trip to Rome so the Pope could crown him as an earlier Pope had crowned Charlemagne, the first Holy Roman Emperor. Instead, Maximilian chose to be crowned nearer to home, in Aachen, Charlemagne’s capital.