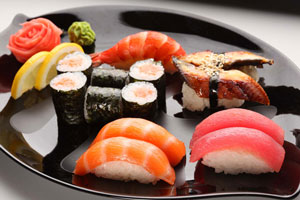 The very earliest people who lived in Japan, starting about 40,000 years ago, lived mainly on fish caught from the sea, though they sometimes hunted local deer or other animals for their meat and they collected plenty of nuts and pears, too, and ate lots of seaweed with their fish. They picked sudachi fruit (like limes) and squeezed the juice over their fish. They ate shellfish, and salmon.

Stone Age Japan
History of fishing
What is seaweed?
A project: eating seaweed
All our Japan articles

By around 14,000 BC, people in Japan began to ferment fish in clay pots, in order to preserve it as a sort of pickled fish sauce something like ketchup or kimchi. This was the world’s first pottery.

By about 1500 BC, with better fishing techniques, people in Japan began to eat more deep sea fish, like tuna, which they considered a treat.

When did rice come to Japan?

A much bigger change in Japanese food came around 800 BC, when people visiting from China brought rice to Japan and showed Japanese farmers how to grow it. Ever since then, people in Japan have eaten mostly rice and fish and vegetables. These Chinese visitors also brought peaches and pigs to Japan, and people raised them, but pork never became as popular as fish.

History of rice
A rice-cooking project
Where do pigs come from?
How about peaches? 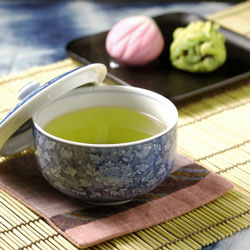 When did tea come to Japan?

Nobody knows exactly when tea first came from China to Japan, but certainly people in Japan were drinking tea by around 800 AD. Japanese people seem to have been eating chicken by that time, too.

History of tea
Where do chickens come from?

Although chicken never became very popular, eggs became a regular part of Japanese food, in the form of omelets, or mixed with rice noodles or in soup, or as a custard called chawanmushi. Other Chinese foods that came to Japan in the Early Middle Ages include persimmons, yuzu (like lemons), kumquats, plums, and grapes.

Learn by doing: go out for sushi, or buy sushi at the store and bring it home for lunch. Or try some kumquats!
History of Rice
Chinese food
More about Japan