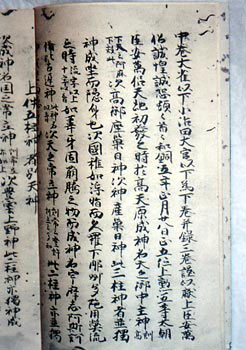 Early Japanese literature: A copy of the Kojiki from the 1300s AD

Printing and paper in Japan

Just after 700 AD, the Japanese Empress Genmei ordered her staff to write and publish Japan’s first history book, the Kojiki, and the first geography and botany book, the Fudoki. The recent invention of wood-block printing meant that people were publishing and reading a lot of books in nearby China, and Genmei wanted to keep up.

The new craft of paper-making, which came to Japan from China (possibly through Korea) about 610 AD, made books less expensive than they had been before, too. Genmei’s daughter, the Empress Gensho, had another history book published too, the Nihonshoki.

The first Japanese poetry book, the Manyoshu – a collection of poems by different authors – came out about 760. In 764, Empress Koken published Japan’s first wood-block printed mass-produced text – a Buddhist prayer. All of these books were written in Chinese characters, even though they were in the Japanese language. 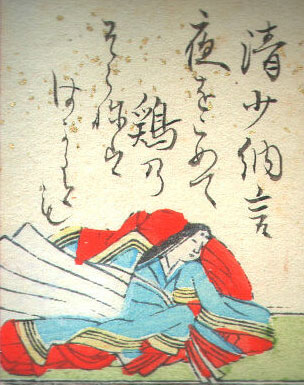 As Japan turned away from China in the early 900s, another book of poetry, the Kokinshu, started a trend of writing in a more Japanese style. Many of these poems had lines of 5-7-5-7-7 syllables, the ancestors of later haiku. People began writing in a mixture of Chinese characters and new phonetic characters called kana that worked better for Japanese. Possibly the Buddhist priest Kukai, who visited China and learned Sanskrit there in the early 800s AD, based the kana characters on the alphabetic writing of Sanskrit.

History of the alphabet
Buddhism in Japan
Heian period Japan

The Tale of Genji and the Pillow Book

Around the year 1000, ambitious women found they could help their families gain power through their writing. Murasaki Shikibu wrote The Tale of Genji, a novel about an emperor’s son and his romances, and at the same time Sei Shonagon wrote The Pillow Book, a collection of poems and essays.

People kept on writing historical epics in late medieval Japan; the Taiheiki, written in the late 1300s, tells the story of Emperor Do-Gaigo and the first shoguns a generation earlier.