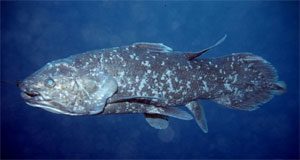 Coelocanth: a fish from the Devonian period

When was the Devonian period?

Four hundred and sixteen million years ago, when the Silurian period ended and the Devonian period began, most of the land on Earth was clumped together into a supercontinent called Gondwana.

Life in the early Devonian

At this time the only creatures that lived on land were small plants like moss and lichens, mushrooms, and other fungi, and tiny arthropods like millipedes, spiders, and scorpions. In the oceans, there were many more creatures ranging from clams to crabs, octopuses, and fish, and lots of seaweed too.

When did moss evolve?
All about arthropods
Evolution of fish 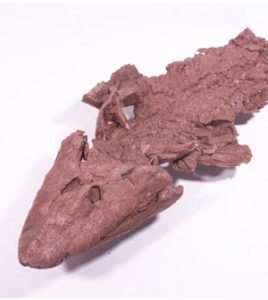 Skeleton of Tiktaalik, one of the first fish with legs

About 375 million years ago, some of the fish developed legs and began to walk on land. These amphibians were the first animals with spinal cords to leave the water.

Near the end of the Devonian period (360 million years ago), some larger and more complicated plants evolved on land too. These were mainly ferns. Some giant ferns were as big as trees!

So a lot of the land now became covered with thick, tall forests of giant ferns and mosses, and even a kind of fungus that could grow eight feet tall. But the very beginnings of plants with seeds, and even flowering plants, were also getting started at the end of the Devonian period.

What ended the Devonian period?

The Devonian period, like the Cambrian and the Silurian, ended with a crisis that killed off most of the plants and animals that were on Earth at that time. This was about 359 million years ago. Nobody knows what caused the crisis – it might have been global cooling or a lot of volcanoes erupting, or a comet hitting the Earth.

More about volcanoes
What is a comet?

Nearly all of the early fish except the coelocanths died, and most of the relatives of lampreys (except the lampreys themselves). The next period was the Carboniferous Period.

Learn by doing: flowers
Go on to the Carboniferous period

Bibliography and further reading about the Devonian period and geology: