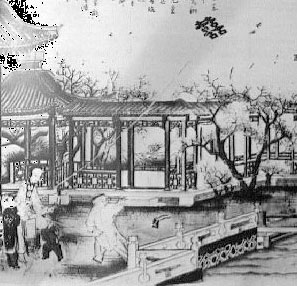 The earliest kites were probably invented in China about 800 BC, during the Zhou Dynasty. People made these early kites out of bamboo and silk. Chinese people flew kites for fun, and also used kites in war to carry messages, to signal people far away, and to carry explosives into besieged cities. Silk was expensive, so these early kites were probably pretty expensive too.

Where does silk come from?
The Zhou Dynasty
Invention of gunpowder
All our China articles

Kites made out of paper

When Ts’ai Lun invented paper during the Han Dynasty, about 100 AD, people began to make kites out of paper instead of silk. Paper kites were lighter and easier to fly. They were cheaper to make, too. By the time of the T’ang Dynasty (about 650 AD) most kites were made out of paper.

People flew kites as part of the Qingming festival, sometimes fastening little lanterns to them and flying them at night, then cutting the string so the kite would float away, taking your bad luck with it. (Don’t try this at home! You could set someone’s house on fire, or the woods!)

Kites in Japan and Korea

People were flying kites in Japan and Korea in the 600s AD. Buddhist monks probably brought the idea of making kites to Japan and Korea from China, along with many other new ideas like writing. To people who didn’t have airplanes, or satellite photographs, kites were exciting – a way to soar up in the sky! Almost like flying!

When did kites reach Europe?

The first kites seem to have come to Europe along with folding paper fans in the 1500s, when sea trade with China became a regular thing. Kites took a while to catch on. There’s no kite in Pieter Brueghel’s Children’s Games, from 1560. So kites were still pretty exciting in the late 1700s, when Benjamin Franklin and others used them to do (very dangerous) experiments with lightning and electricity.

Make your own Chinese kite project with Instructable’s excellent directions