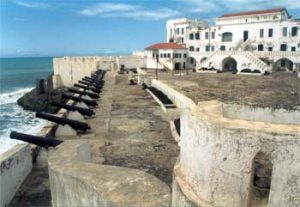 Although other people, both white and Native American, have been held as slaves in North America, the experience of the African people who were forced to come to North America as slaves was more unusual, because more than half of the people living in slave states were slaves.

How did people become enslaved?

In the end somebody would sell you to a white man who would keep you in a slave fort on the coast of Africa. Half of the people captured with you died of hunger or sickness, while you were walking to the coast.

More about dysentery
And about malaria
And yellow fever 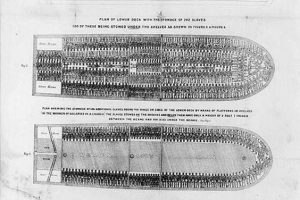 The Middle Passage: A diagram of how to stack people to get hundreds of them on one ship

Soon men with guns would force you to get on a ship, and they would take you to North America (or, more often, Brazil or the Caribbean).

Cotton in North America
Sugar in the Caribbean
Coffee in Brazil

The ship was terrible – dirty, and stinky, and you were crowded like on a crowded bus, and you had to stay there for two or three months. You wore chains that fastened you to people on either side of you the whole time. You had to lie down because there wasn’t even room to sit up, the ceiling was so low. Almost one out of ten of the people around you got sick and died.

Sometimes people gave up and tried to starve themselves to death, but the sailors beat them or tortured them until they ate something. Sometimes people call this horrible trip the Middle Passage. 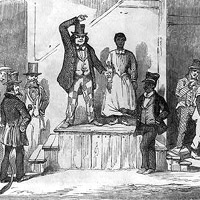 Selling people to be slaves

Auction in the Americas

When you got to America, you got a few weeks to get healthier, and you got a European-style dress or pants to wear, and then the slave trader sold you to whoever would pay the most for you.

History of tobacco
Growing rice in the Americas
What kind of food did enslaved Africans eat?

Most people in North America went to southern states like Mississippi or Alabama to pick cotton, A few people went further north, to the Carolinas, to plant and pick tobacco and rice and indigo – a blue dye for clothing. But overall most of the slaves went to Brazil or the Caribbean.

Learn by Doing – Slavery Project
What was it like to be a slave?