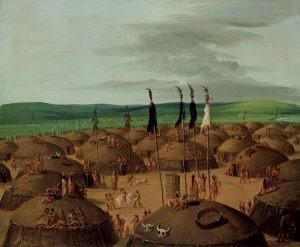 In the Paleo-Indian period, everyone in North America lived in small bands, usually just your family and maybe one or two other families – not more than ten to fifteen people. Most of the time, those were the only people you saw, and your mom, or your uncle or grandpa or grandma, made the decisions for your band. Once in awhile you might get together with some other bands for a religious ceremony and so you could find someone to get married to.

By the Archaic period, about 8000 BC, this was beginning to change. Some people began to live in bigger villages, maybe with chiefs. The chief would be a richer person. People probably chose their chief by having a meeting where they would try to agree on the best person to be the chief. Often, the new chief would be the son or daughter of the old chief. People lived in bigger groups where there was something that was important to control, like a river crossing or a lake. Or they settled in bigger groups where there was plenty of food for everybody. The Chinook settled near the salmon of the Columbia River. Mississippians settled where they could control the Mississippi river.

Around 3000 BC, people formed the first states in Peru and Ecuador, further south. North America was poorer, and colder, and it was harder to farm there. So people in the Late Archaic period there did not form states yet. Instead, they lived in complex chiefdoms. Each village had a chief, but there were more and more super-chiefs who told all the other chiefs what to do, especially when there was a war. This arrangement probably lasted through the Woodland period.

States gradually spread northward and eastward from South America. It took time, but people slowly managed to adapt corn and beans and squash – the Three Sisters – so they would grow farther and farther north. Then they turned to farming, and started to live with state governments. By 1200 BC, the Olmec had a state government in Mexico. By 500 AD, the Pueblo people in what is now Arizona, New Mexico, and Colorado probably did too. Not long after that, the Mississippians probably had a state government. Still further north and east,  the Cherokee and the Iroquois still lived under complex chiefdoms. And in places where the land wasn’t good for farming, others still lived in bands, like the Ute, the Paiute, the Inuit, and the Blackfeet.

American government after the European invasion