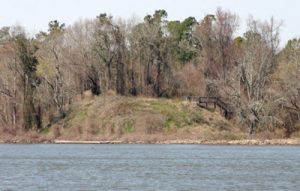 Mound on Lake Marion, Santee River (thanks to Wikipedia)

About 800 AD, ancestors of the Sioux people probably lived in the south-eastern part of North America, around where South Carolina is now. Like the Mississippians to their west, they built earth mounds, and probably they also farmed corn and beans and sunflowers.

Around 1000-1300 AD, a global warming period encouraged a lot of people to move further north, following the climate they were used to, and the Sioux were probably among them, moving north-west into Ohio. Here the Sioux seem to have moved into the territory of the Mandan, who were forced to move further north and west.

Sioux people did not call themselves the Sioux (that’s what their Algonquin neighbors called them, meaning “people who speak another language”), but Isanti or Santee, and sometimes Lakota, Dakota or Nakota (these last all mean “friends”). They spoke their own language that is not closely related to the language of their Cree and Ojibwa neighbors, Algonquin. 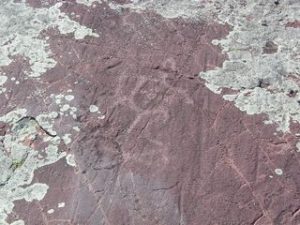 However, after the Sioux moved north to Ohio, the climate cooled off again. The Sioux found that they couldn’t grow corn or sunflowers so far north, where there were so many trees. Though they still did some farming, they also did a lot more hunting and gathering. In the 1200s and 1300s AD, the Sioux (pronounced SOO) ate mainly wild rice, like their neighbors the Cree. They also hunted deer and small animals like rabbits, and they gathered berries and bird eggs and wild plants, in addition to gathering wild rice. Some Sioux made a living quarrying pipestone to sell down the Mississippi to their southern neighbors.

Around 1400 AD, the Sioux moved on out of Ohio, further west to Minnesota, perhaps pushed by the Ojibwa. At the time that they saw the first French explorers, the Sioux were living in Minnesota.

Learn by doing: eat some wild rice (you can buy it at the grocery store)
The Sioux after the European invasion

The Mandan
The Cree
The Blackfoot
Native Americans
Quatr.us home