Cherokee food: Corn on the cob

People who lived in the Cherokee nation were mostly farmers. They ate mainly corn and beans and squash (the “Three Sisters“) that they grew in their fields.

How did the Cherokee cook corn?

They made the corn into flat breads like tacos and tortillas and they made the beans into refried beans, soups and stews. They also made popcorn for special treats!

More about popcorn
History of corn

Cherokee people also grew and ate a lot of sweet potatoes and peanuts, and they grew sunflowers for their seeds.

History of sweet potatoes
Where do peanuts come from?
Why do people grow sunflowers? 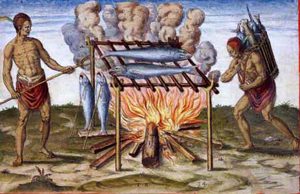 Did the Cherokee eat meat?

Cherokee people also ate a lot of meat, especially deer and rabbits and turkey, and a lot of fish and turtles.

History of turkeys
More about fishing

It’s possible that they were raising tame turkeys by about 1200 AD. They kept some small dogs and ate them, too. Cherokee people did not live entirely from farming and hunting like the Mississippians to their west, though – Cherokee people kept on getting a lot of their food from gathering as well.

What about the Mississippians?

They gathered shellfish, because they lived near the coast, but also blueberries, blackberries, acorns, chestnuts, and wild onions. This is probably mainly because of differences in the environment.