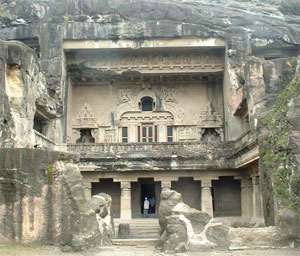 Outside of Carpenter’s Cave, Ellora Caves, about 575 AD

In the Guptan period, architects in India were beginning to build more and more temples. The earlier Buddhist temples at Ajanta were not enough anymore. So people carved the Ellora Caves.

Where are the Ellora temples?

Starting about 550 AD, engineers cut thirty-five temples and monasteries into a cliff in north-western India, near Mumbai, at Ellora. It was easier to cut temples into the cliff than to figure out how to make big buildings out of stone.

Ellora was on the main road between north India and south India. So it was a good place to build monasteries. Then travelers could stay the night in the monasteries. (There were no hotels in India at that time).

The first people who carved temples at Ellora were Buddhists, so they built temples to the Buddha. People built these Buddhist temples and monasteries between about 550 and 700 AD. That was about the same time that Buddhists farther east were building the Dunhuang Caves.

What is Buddhism?
Buddhist monks and monasteries
The Dunhuang Caves

Because the people who carved the images were still new to carving stone, they often tried to make their stone carvings look like wood. In the “Carpenter’s Cave”, the builders carved bands of stone to look like wooden beams holding up the ceiling. 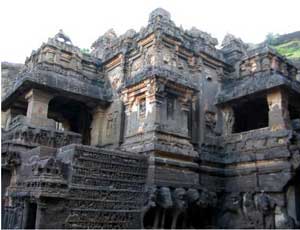 But Buddhism became less popular in India, beginning in the 600s AD. Then Hindu people built Hindu temples to Shiva and Vishnu at Ellora. The Hindu temples were very complicated and sometimes took a hundred years to finish.

What is Hinduism?
The Hindu god Shiva
Medieval Indian architecture

Some of these temples are in a south Indian style, even though they are in the north, because King Krishna I of Manyakheta built them about 760 AD. The king had conquered part of south India too, and he wanted people to know how big his empire was.

Beginning about 800 AD, people built Jain temples at Ellora too. Now Jains who were traveling would also have a comfortable place to stay. At this time, people from the different religions were not fighting, so they didn’t mind having their temples near each other.

Who are the Jains?
Medieval Indian economy

By 1100, Ellora was big enough. People stopped carving new caves there. But they kept on using the caves to worship the gods, and to stay in when they were travelling, for hundreds more years after that.