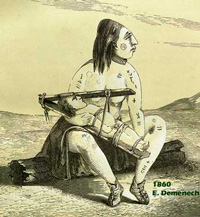 What did Chinook people make clothes out of?

Around 1500 AD, Chinook people, both men and women, wore leather leggings and long leather shirts. Women’s shirts were longer than men’s, and their sleeves were wider. In warm weather, people often wore less clothing, and in winter they often wrapped furs around them to keep warm.

What about bark cloth?

Like people in Africa, Chinook people also made short skirts and hats out of pounded bark from cedar trees (and also sleeping mats).

You could tell rich people’s clothing apart because rich people had time to decorate their clothes with lots of beads, feathers, and shells.

What about body modification?

The only people who didn’t have their heads flattened were enslaved people taken from other tribes, so people were happy to have flat heads to show that they were born free. Richer women also got tattoos on their arms and legs, as this woman has. 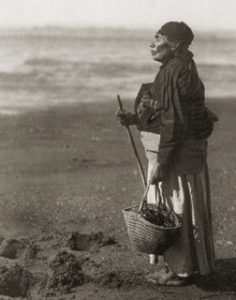 When European sailors first started to come to Chinook land, people got blue and white Venetian and Indian trade beads from them.

American clothing in the 1700s
History of glass beads
Where is Venice?

Both men and women wore these blue and white trade beads as bracelets around their wrists and ankles, which sometimes were so tight that they cut off circulation and made their legs and hands swell up.

But with the coming of European settlers in the late 1800s, people gradually gave up their leather clothes to wear less expensive wool and cotton clothes that they bought from the settlers.

History of wool
Cotton and sharecropping
American clothing in the 1800s

And as there got to be fewer and fewer Chinook people, and most Chinook women had to marry Europeans or people from other tribes, flattening heads gradually went out of fashion too.

Learn by doing: discussing body modification
More about the Chinook