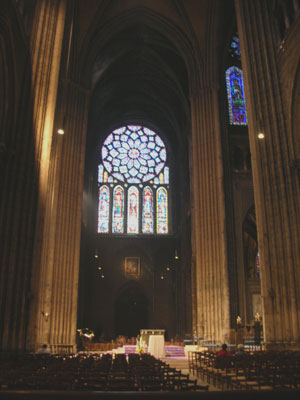 Then they built the transept. At each end of the transept they built big doors, and over the doors a fancy round stained glass window called a rose window (because the stone ribs inside the window look like a flower).

Finally, the builders began work on the apse. Because Chartres was a pilgrimage church, a lot of people would want to walk around the back of the apse to pray in all the little chapels back there. So the builders put in double aisles back there, to make room for more people. 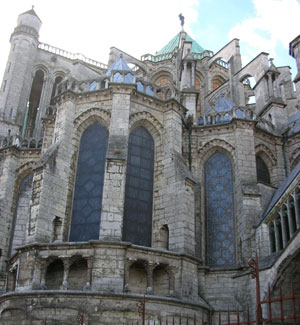 The apse of Chartres cathedral

When all of the stonework was done, the craftsmen finished the details. They carved statues and stories all over the outside of Chartres cathedral, and they put fancy stained glass in the windows.

When the people of Chartres finished building their cathedral, in 1260 AD, the king of France, Louis IX, came to the opening ceremony. Afterwards, the people of Chartres used their big cathedral for all kinds of things, not just praying. Four times a year, they held big fairs in the cathedral, with the cloth-sellers in the north transept. People sold vegetables, wood, and meat in the south transept. In the nave, merchants sold wine. Carpenters and masons came to the cathedral to look for work. When there was a plague, people used the cathedral for a hospital. eachers taught school in the cathedral too.

Learn by doing: build a cathedral in Minecraft or out of Lego
More about Chartres cathedral