Chartres cathedral – inside the church 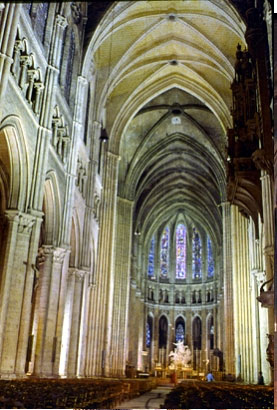 The architect started from the west end of the cathedral, at the nave. The builders built the nave very tall, the highest in France at that time – 120 feet. And, to keep the church from burning down again, they put on a stone roof instead of a wooden one.

What is Chartres Cathedral?
What is a cathedral?
Gothic architecture
All our Medieval Europe articles

But a stone roof was very heavy. It pressed down on the walls, and pushed them outward, so the builders had to built big stone buttresses on the outside of the church to push back the other way, so the walls wouldn’t fall down. To make the roof lighter, the builders used the new four-part vault for the roof, instead of the older six-part vault as at Notre Dame in Paris.

Flying buttresses let in the light 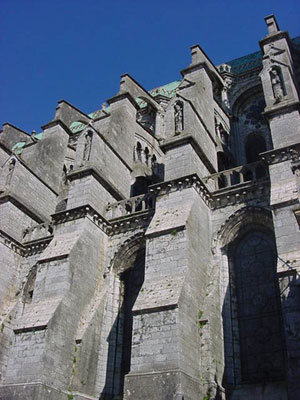 Because of the lighter roof and the flying buttresses, the walls didn’t have to hold up much weight, so they could be mostly glass. Here you can see the elevation (the way the walls look) – see how much is glass or archways, and how little is made of stone?

What is a flying buttress?
More about window glass 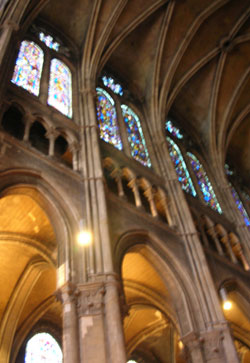 The walls of Chartres Cathedral

If you compare the walls of Chartres with the walls of Notre Dame in Paris, which was built only a few years earlier, you can see that there is a lot less wall and more glass at Chartres. The arches have gotten higher, the gallery has gotten smaller, and the windows have gotten bigger than at Notre Dame.

Also, check out how the columns between the arches are made with lots of little columns that run almost uninterrupted all the way up to the ceiling, to draw your eyes up to Heaven.