As more and more people wanted chocolate, farmers had to grow more and more cacao beans. By 1677, Spanish land-owners were buying West African people to farm cacao beans as slaves, first in Brazil, and then in Venezuela.

African-American slavery
Brazil and colonization
All our South America articles

Gradually during the 1600s Europeans began to let kids drink chocolate too. Traders slowly convinced people further and further east to try chocolate: in 1643, people drank chocolate in France; by 1704 in Germany, by 1711 in Vienna, and before 1750 people in Russia were trying chocolate too.

European traders brought chocolate-drinking back west to North America in 1755. By 1834 British traders were trying to get people to drink chocolate in India, and soon after that in China, but chocolate didn’t really become popular in India or China – most people drank tea instead. 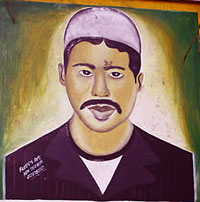 More and more people wanted chocolate, but the American Revolutionary War in 1776, and the War of 1812 after that, made it hard to ship cacao beans from South America to Europe – there was too much fighting going on among ships in the Atlantic Ocean.

By 1819, Christian missionaries brought cacao beans to West Africa to grow there, because West Africa had the same rainy, hot climate as Central America, and there weren’t any wars there.

Who was Tetteh Quarshie?

But cocoa trees did not really grow very well in Africa until a 28 year old Ghanaian man, Tetteh Quarshie, went to South America himself and learned how to grow cacao trees in 1870. After that a lot of chocolate came from Africa. 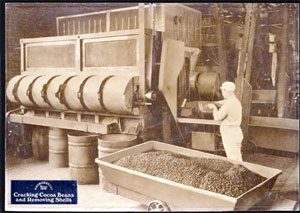 In 1830, British chocolate makers invented a way to make solid pieces of chocolate, instead of just hot chocolate drinks. (The secret is adding extra cocoa butter.) People began to give chocolate candy in heart-shaped boxes for Valentine’s Day.

History of Valentine’s Day
Also about Easter
And Christmas

Modern steel-making
And the rubber industry 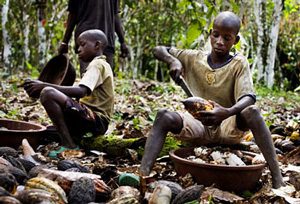 Chocolate gets much cheaper

Because enslaved people worked without pay in West Africa to grow cacao beans, and workers in factories in Europe and the United States used machines to make the beans into chocolate, chocolate became much cheaper than before.

By 1900, chocolate bars were an ordinary treat for most people in Europe and North America. In Central America, people began to eat chocolate bars, but they continued to make their traditional bitter chocolate drinks as well.

By 1910, progressives in the United States convinced Congress to pass a law that no chocolate grown by slaves could be sold in the United States. But most people who picked cacao beans were still very poor and overworked, and many of these people were children.

By 2000, a few small chocolate producers in the United States began to produce chocolate from Fair Trade farms, but 99% of the chocolate sold in the world today is still picked and processed by very poor people, and hundreds of thousands of those people are enslaved children.