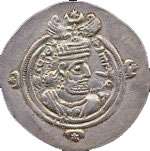 The most important part of the Sassanian economy, as in all other states in Late Antiquity, was farming – most people still were farmers, growing mainly wheat and barley. But most farmers didn’t eat the food they grew. They sold their wheat or barley to a mill and used the money to buy food in farmer’s markets or in stores or restaurants, as farmers do today.

Because of this constant trading, most people, even ordinary farmers in the countryside, needed to use money, and there are lots of Sassanian coins in all different values – gold, silver, and bronze. 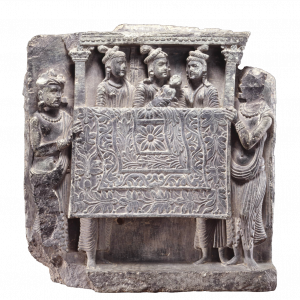 A knotted carpet hanging from a litter. Probably from the Swat Valley (modern Pakistan). 0-200 AD

The other important part of the Sassanian economy was, as in the Parthian Empire and earlier, trade along the Silk Road between India and China in the east and West Asia, Africa, and Europe to the west. The Sassanians didn’t go to China themselves. They traded with the Sogdians and Gokturks to their east, and the Sogdians and Gokturks traded with China.

The Sassanians started up some new industries in West Asia that became very successful. In the 500s AD, they began to grow cotton to make locally produced cotton cloth. And they kept on producing other things to sell on the Silk Road too. They made beautiful Persian carpets. They made silver bowls and cups, that people always wanted in China. And they made all sorts of things out of glass, too.

Bibliography and further reading about the economy of the Sassanian Empire: