Iron Age economy: Phoenician glass – a face pendant of an African man. 400-200 BC

Traders in the Mediterranean

The rise of the Assyrian empire (in modern Iraq) and of the Phoenicians (in modern Lebanon) about 900 BC created a new economic boom in West Asia. The Phoenicians traded all over the Mediterranean Sea in ships, and established trading posts at Carthage and in Spain and Sicily.

Who were the Assyrians?
And the Phoenicians?
Iron Age timeline
West Asian economy
All our West Asia articles

Factories made glass beads and little glass perfume jars and glass jewelry to sell. A lot of the people who worked in these factories were enslaved. Some poured the glass, and others pumped the bellows to keep the fire hot. Traders also sold things that other people had made, like iron tools, pepper and cinnamon from India, silk from China, wine from Greece, and ivory from Africa.

Who invented glass?
What is a bellows?
Iron and early steel
Where is pepper from?
How about cinnamon?

The Phoenicians traded these things around the Mediterranean for Spanish silver, and for enslaved people and wood and furs. They traded with the Etruscans, and then with the Romans. They also traded with the Egyptians.

Wine and wine-making
Who were the Etruscans?
Early African economy

The Assyrians and the Iron Age economy

The Assyrians were also active traders. They acted as middlemen between India and Iran and the rest of West Asia. We tend to think of the Assyrians mainly because they fought (and won) a lot of wars. But they didn’t just get rich by looting their neighbors’ stuff. They also traded with their neighbors, and with people further away. 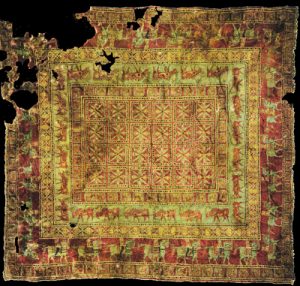 Assyrian spinners and weavers – many of them enslaved – made and sold a lot of wool cloth, and linen cloth. They got lapis lazuli from the Sogdians in Afghanistan to their east, and horses from Iran. Probably they also got patterned Persian carpets.

History of wool
And of spinning
History of slavery
Who were the Sogdians?
Persian carpets

So, did you find out what you wanted to know about the Iron Age economy in West Asia? Let us know in the comments!

Learn by doing: make some perfume
The rise of the Silk Road
Parthian and Sassanian economy

Bibliography and further reading about the West Asian economy in the Iron Age:

Find Out About Mesopotamia: What Life Was Like in Ancient Sumer, Babylon and Assyria, by Lorna Oakes (2004). Easy reading.