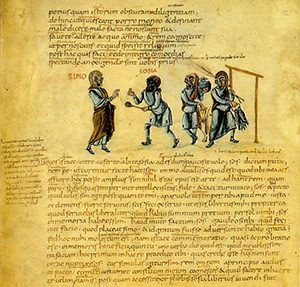 Terence was born about 185 BC, soon after the end of the Second Punic War. His whole name was Publius Terentius Afer. Because he has “Afer” (which means Africa) as part of his name, people think he may have come from North Africa. He may have been black. Maybe he was sold into slavery as part of the Roman occupation of North Africa after the Punic Wars.

Certainly by the time Terence was a young man, about 165 BC, he was the slave of a Roman senator. According to one story, the senator saw how smart Terence was, and not only freed him, but paid for Terence to get a good education. Terence became friends with Scipio Aemilianus, a powerful young politician in Rome, who helped Terence to get his plays produced.

Terence wrote his first play, Andria, when he was only 19 years old, and it was performed at Rome about 170 BC. He wrote other plays too – we don’t know how many. All of Terence’s plays were, like those of the earlier Roman playwright Plautus, translated versions of Greek comedies. Most of Terence’s plays were translations of plays by Menander, but one at least (Phormio) was a translation of a play by another Greek playwright, Apollodorus. But while Plautus had moved the setting of his plays to Rome, Terence kept the original Greek setting. Most people think Terence’s Latin is more elegant and beautiful than the Latin of Plautus.

Terence died young, when he was only about thirty years old, in 159 BC. He was travelling to Greece when his ship was lost at sea. People kept on reading and performing his plays throughout the period of the Roman Empire. Jerome‘s teacher, Aelius Donatus, wrote a book about Terence’s plays about 300 AD.

When people in Europe learned from the Egyptians and Central Asians how to make paper and print books in the late Middle Ages, Terence’s plays were among the first books they printed, in Germany in 1470 AD. People chose Terence’s play Andria to perform in Florence soon after that.

More about Plautus
More about Menander
And more about early printing

Bibliography and further reading about Terence: