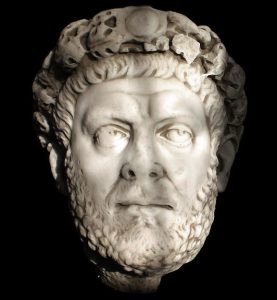 The Roman emperor Diocletian, who organized the Great Persecution of Christians. (This statue would have been painted and not white.)

The Roman Emperor Diocletian came to power in 284 AD. Diocletian was an army general. So he felt that a lot of the empire’s problems could be solved by not allowing so much freedom. Instead, everyone should do the same thing, the right way (his way).

Who was Diocletian?
Christianity before Diocletian
Timeline: Antiquity
All our ancient Rome articles

First Diocletian was busy fighting the Germans and the Sassanids and having civil wars, then for a while he was busy trying to fix the economy.

Why did the persecution start?

But by 301 AD Diocletian had noticed that there were people who had different religions in the Roman Empire. Diocletian HATED this idea. First of all, these people were different from him, which seemed disrespectful. Second, they might be making the gods mad. So they had to be stopped. First Diocletian got rid of the Manichaeans.

Who were the Manichaeans?
Roman religion

Diocletian’s palace at Split (the bell tower was added later)

The Roman emperor Galerius, who started out as Diocletian’s assistant

Then (since that had gone pretty well), in 303 AD he began a big persecution of the Christians.
This didn’t go as well. Diocletian’s co-emperors in the West weren’t very interested in killing Christians, so a lot of Eastern Christians just moved to the West. Others moved out of the Roman Empire, east to the Sassanian Empire.

Sassanians in the 300s AD

Did Diocletian kill a lot of Christians?

Even Diocletian didn’t really want to kill a whole lot of people. He just wanted them to worship his gods. He didn’t really know what to do with the ones who said no. Sometimes he kept them in jail for a while and then let them go. Sometimes he killed them, but probably the total number of Christians killed in the Great Persecution was a few hundred. Christians kept good records, and probably didn’t miss telling us about lots of them. More often, Roman officials made convicted Christians go work in the mines, like slaves.

Slavery in the Roman Empire
History of silver mining

Even after Diocletian retired in 305 AD, his successor, Galerius, still persecuted the Christians, but still without getting rid of them.

Constantine and his Conversion
More about Diocletian