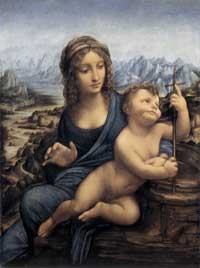 Europeans got richer in the later Middle Ages thanks to the wool trade. More and more rich Europeans wanted to buy paintings. So more and more artists, like Leonardo da Vinci, were able to make a living by painting. In the 1500s, Europeans forced Islamic, African, and Indian traders to hand over most Afro-Eurasian trade to them. And Europeans started to bring back tons of silver and gold from the Americas. Now people in Europe got even richer, and they wanted even more paintings.

In the early 1500s, Italian artists like Leonardo da Vinci and Michelangelo painted mainly Christian scenes like the Last Supper or the Last Judgment. They built on the work of medieval artists like Giotto, adding more landscape details, using perspective more carefully, and working to make muscles and clothing more realistic. They even cut open dead people to see how their muscles worked. Raphael began to also paint scenes from ancient Greece and Rome. He adapted decorative details from the newly rediscovered Golden House of Nero. (He had to lower himself down into it on a rope with a candle to see the paintings!) People in the 1500s liked to think of themselves as the new Roman Empire – rich and powerful. 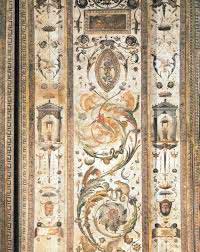 These rich Europeans especially liked pictures of themselves, looking rich in their pearls and silk clothes. That’s what portrait artists in Venice, like Titian and Tintoretto, painted in the 1500s AD. When they weren’t painting rich people, Titian and Tintoretto also painted scenes from Greek and Roman mythology.

Like Titian and Tintoretto, El Greco worked in Venice in the 1500s. But then he moved to Spain, where silver was pouring in from the Americas and there were a lot of rich customers. His long, thin, almost abstract people were unlike anything anybody else was doing at this time. But they show the spirit of experiment that you can get when there’s plenty of money lying around. 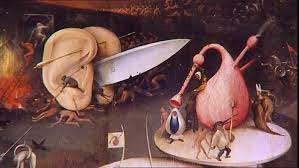 Further north, the same spirit of experiment inspired Hieronymus Bosch to paint fantastic scenes of monsters and impossible fantasy landscapes. About the same time, Pieter Brueghel painted more realistic landscapes. His were experimenting with showing secular subjects like children playing, or scenes from Greek mythology, instead of Christian scenes. It seems likely that Brueghel was riffing on Chinese paintings he had seen (maybe on imported porcelain vases). Because the Little Ice Age was making winters much snowier in northern Europe, Brueghel painted a lot of winter scenes, too.

Learn by doing: paint something experimental
More about the Renaissance

More about Titian
More about the Renaissance
Quatr.us home