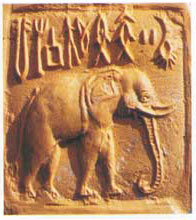 Harappan seal ca. 2000 BC – before there were coins in India

The first metal coins also probably came to India from West Asia, but again Indian traders were not far behind. By around 600 BC, in the time of the Vedic expansion, Indian traders and manufacturers were minting these long, skinny coins, and square coins, to make trade easier. But for a long time people also used cowrie shells as money, as they did all across Africa, Southeast Asia, and China.

More about the Iron Age
History of money 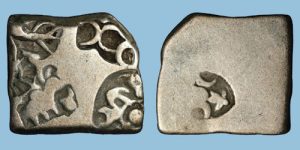 The Silk Road and Ashoka

Gradually, because there was a shortage of cowrie shells, people in India (and elsewhere) turned more and more to metal coins. The Silk Road led people to decide on regular sizes and shapes (round or square) for coins all over Europe and Asia.

More about the Silk Road
Who was Ashoka?

The Sogdians and Seleucids minted standard coins north and west of India starting around 300 BC. The first standard coins minted in India are those of the Mauryan Empire‘s ruler Ashoka, about 250 BC. 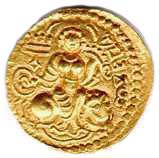 By the time of the Guptan Empire in the 300s AD, the Indian kings were minting coins just like the coins of the Parthians to their west, or the Sogdians to their north. These coins have the king on one side and Hindu gods on the other side.

More about Hinduism
The Guptan Empire

During the early Middle Ages, western Indian traders often used Byzantine gold coins. Byzantine coins were good quality coins. They were easily available because India traded so much with the Romans. But after the Islamic invasion of northern India about 1000 AD, the coins used in northern India gradually lose their images (because Islam forbids images) and have Arabic writing on them.

Bibliography and further reading about the ancient Indian economy:

Arab Seafaring: In the Indian Ocean in Ancient and Early Medieval Times, by George Hourani and John Carswell (2002). For adults, a time-tested account of trade between India and the Arabian Peninsula.

Eating India: An Odyssey into the Food and Culture of the Land of Spices

, by Chitrita Banerji (2007). Not a cookbook, but a discussion of food in India, for grown-ups.