Did ancient Egyptians go to school? 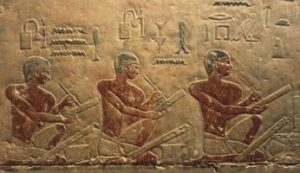 Egyptian schools taught people how to be scribes

Did girls go to school in ancient Egypt?

There were schools in ancient Egypt, but hardly anyone went to them. Even though Egyptian girls in general were equal to boys under the law and could inherit land, girls weren’t allowed to go to Egyptian schools at all.

Whatever they learned, they had to learn at home from their mother or father or from a private tutor (usually a slave) who lived in their house. Very few girls could read or write, and only the richest ones. 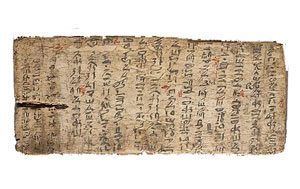 Most boys didn’t go to school either, but a few boys from richer families went to a special school to train boys to be scribes.

What was a scribe?

A scribe was someone who could read and write. Not very many people could read or write hieroglyphics (which was much harder than alphabet writing). So Egyptian scribes always found good jobs keeping people’s records for them. 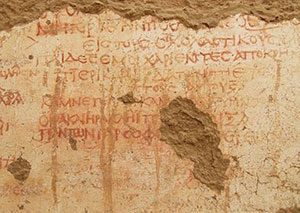 Decoration in Egyptian schools: A quote from the Odyssey on a school wall in Upper Egypt

(More about the economy of ancient Egypt)

Many of them worked for the government figuring out budgets and taxes. So Egyptian schools also had to teach students to be good at math.

How old were Egyptian kids when they went to school?

If you were going to be a scribe, you started school at four and went to school until you were about fifteen.

The Egyptian school room with the decorated walls

Ancient Egyptian schools looked a lot like modern schools, with benches for the children and a big chair for the teacher.

The walls of this mud-brick classroom from the Hellenistic period were plastered and decorated with quotes from the Odyssey about behaving and working hard. 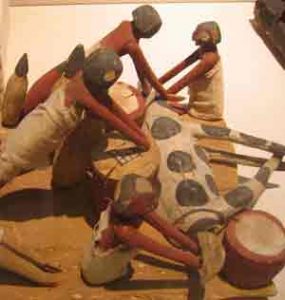 Men working in a butcher shop (ca. 2300 BC),now in the Oriental Institute, Chicago

Of course kids learned many things, even though most of them were unschooled. 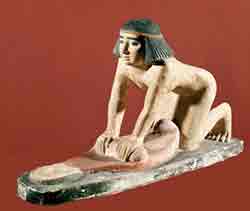 Some boys learned how to be butchers or shoemakers or weavers or fishermen or many other jobs like that.

Did Egyptians go to college?

Yes, there were universities in ancient Egypt, where you could go to learn more advanced material. Egypt was famous for its medical research and its astronomers and mathematicians, right through the Greek and Roman periods, and through most of the Middle Ages.

Looking for a second source to cite? Check out this excellent article from Ancient Egypt Online!