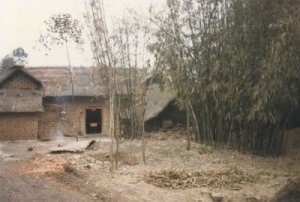 How much house could you afford?

There were really two kinds of houses in ancient China. There were poor people’s houses (which is most of them).

And there were rich people’s houses (there were not very many of these). 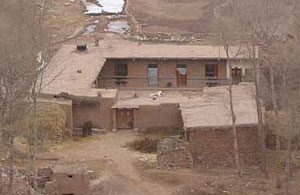 Poor people’s houses were small and made out of cheap materials. They generally had just one room, made of rammed earth (like mudbrick). Builders mixed sand, clay, and gravel and then pounded it until it was hard to make rammed earth. Rammed earth walls could last for many years. The floor was often pounded dirt too, but it might have clay tiles on it. The roof was usually made of thatch.

What is mudbrick?
Why did people thatch their roofs?

These houses were a lot like poor people’s houses in West Asia or Egypt or Greece, India, or Africa. As in those places, poor people didn’t have bathrooms in their houses. They went outside, in the fields or in the woods, or they used a chamber pot inside.

Read more about the history of houses

Rich people’s houses were much bigger. They had a high wall made of rammed earth all the way around them, with no windows and just one door, to keep the family safe.

As soon as you went through this door, you would see another short wall in front of you. This was the screen wall. The screen wall kept people from seeing into your courtyard as they walked by, for privacy.

All around the courtyard there were rooms. In a very fancy house there were two stories, and there was a balcony on the inside of the upper story overlooking the courtyard. 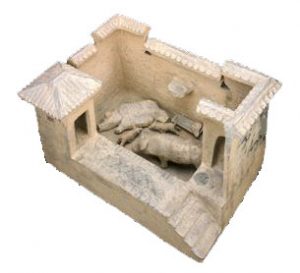 A lot of people had no bathroom at all in their house. They just went outside, or they used a clay chamber pot inside the house. Someone would carry the chamber pot outside to empty it later.

But some Chinese houses had a pig sty – a place to keep pigs – built in the corner of the courtyard. Over the top of the pig sty, they built a latrine with a hole in it.

More about Chinese bathrooms
Where do pigs come from?

So if you went to the bathroom in the latrine, the poop would fall down through the hole to the pigs. In China, pigs ate people’s poop to get fat. That kept food from being wasted, but sometimes it spread dysentery and cholera and typhoid.

Want another source? Read this University of Washington article about houses in China