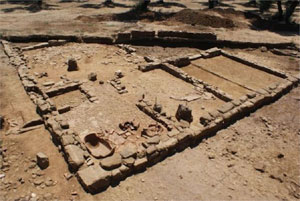 What is a courtyard house?

Beginning in the Bronze Age, and continuing through to modern times, most Greek houses, like Egyptian and Roman houses, were grouped in villages, and had a courtyard in the middle, open to the sunshine, and rooms around the edges.

This is a good layout for hot, sunny places where heating your house isn’t so important but cooling it is. People also slept and worked up on top of the flat roof. It was usually pretty hot in Greece, so this was fine most of the year. In the winter, ancient Greek people heated their houses with charcoal braziers.

More about Greek weather
How do you make charcoal?
What is a brazier?

What were Greek houses made of?

People built their houses of mud brick or stone, with plastered walls and flat or tiled roofs.

What is mud brick?
Lime and plaster 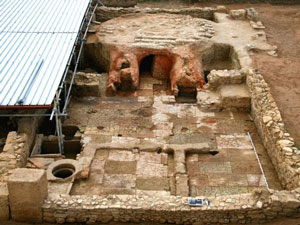 How big were Greek houses?

Many Greek families lived all together in apartments with just one room. If they had more than one room, the front or downstairs room was traditionally the andron or “men’s room” and the back or upstairs room (or just the rest of the house) was the gynaeceum or “women’s room”. But it’s not clear that people really organized their day according to these spaces.

Did men and women hang out together? 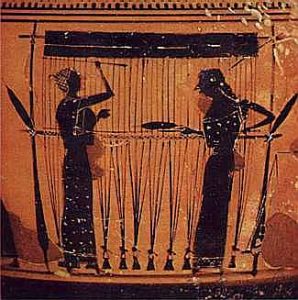 Greek women weaving at a warp-weighted loom – Athens, 500s BC

When men came over, they hung out in the men’s room, and the women stayed in the back where strangers couldn’t see them. In the Odyssey, for example, Penelope and her slaves spend most of their time upstairs.

The Odyssey
Slavery in ancient Greece
Going to get water

But as we see in the Odyssey, women who were enslaved had to go down among the men. And if you didn’t have a well, women had to leave the house to get water.

What did people do in their courtyards?

Free Greek women didn’t hang out in public (though they did visit each other’s houses a lot), so the courtyards were important outside space for them, as well as being a space where young children, dogs, goats, and chickens could play outside safely, and where women could cook without getting the inside all smoky. Many houses had shady peristyles around their courtyard. 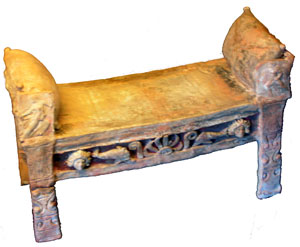 Clay model of a Greek bed

What is a peristyle?
History of chickens
Ancient Greek cooking

Inside the house, there wasn’t a lot of furniture. People had braided or woven straw mats or rush mats made of reeds on the cement or tile floors, and wooden shutters on the windows. Sometimes they had mosaic floors.

What is a mosaic floor?
Straw mats and mattresses

Richer houses had glass in the windows, and poorer houses didn’t. People lit their houses with oil lamps. 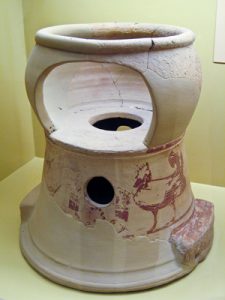 They had wooden folding chairs and little tables and lamp stands, and wooden beds, with strings pulled tight across them and straw mattresses. In richer houses, men had couches to lie on to relax, but women sat on chairs. Houses often had a loom leaning against one wall. People wove a lot of household things out of straw or reeds – baskets, chairs, cushions, screens, fans, and window-shades.

Were there bathrooms and kitchens?

People didn’t think of a bedroom, a living room, a dining room – rooms changed their function all the time. There weren’t built in cupboards or sinks: the kitchen was any room you put an oven in. For bathrooms, people either went outside or used chamber pots, so they didn’t really have bathrooms, either. 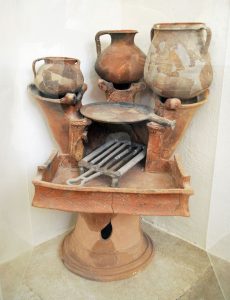 An ancient Greek oven and stove from the island of Delos

Did Greek people work from home?

Many rooms also served as commercial workshops, where people spun and wove cloth, pressed olive oil, or made cheese or shoes or sculpture. A lot of people worked in their houses.

History of cats
Where do dogs come from?

There wasn’t a lot of privacy either. Hardly anyone was ever all alone in a room: parents, children, relatives, employees, enslaved people, cats, and dogs all shared rooms both in the daytime and at night.

Learn by doing: try spending an evening with your whole family in one room – no screens.
More about Greek families

More about the Parthenon
Quatr.us home