What is typhoid fever? History of diseases 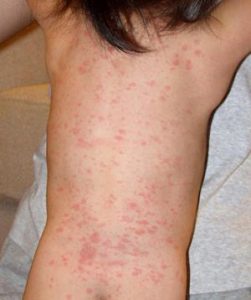 Is it typhoid or typhus?

Find out more about typhus

Why are the names so much alike?

The germs that cause typhoid are a kind of salmonella, which also causes food poisoning. We call this typhoid because some of the symptoms are similar to typhus, so it is typhus-ish, or typhoid.

When did people first get typhoid fever?

It’s hard to tell when typhoid got started, because the symptoms are pretty similar to dysentery and other diseases you get from drinking dirty water.

What are the symptoms of dysentery?

What are the symptoms of typhoid?

At first you get a fever, a headache, and a cough, and sometimes a bloody nose. After a week, you get a very high fever, diarrhea, and sometimes a rash. Many people are delirious. Then in the third week, while most people start to get better, some people get internal bleeding or brain swelling or other problems.

Did people die of typhoid?

Yes! About one out of five people who got typhoid died of it, and about one in a hundred get better but keep the typhoid germs alive, and spread them when they touch food, like the famous Typhoid Mary.

Get your own microscope to see germs!

What are some examples of typhoid in history?

Why don’t we get typhoid?

William Budd, in 1838, was the first doctor to realize that people caught typhoid from dirty water. By the late 1800s, the spread of cholera encouraged many cities around the world to build sewage systems and water systems, and having clean water to drink also helped to keep people from catching typhoid.

A vaccine against typhoid

By 1896 British scientists developed a vaccine against typhoid, and in the First World War many British soldiers were vaccinated. By 1908, as cities began to add chlorine to their drinking water to kill germs, typhoid became more rare.

But typhoid is still common in the global South

But in southern Africa, India, and south-east Asia, where many people have no clean drinking water, typhoid is still a common illness. Doctors can cure typhoid fever with antibiotics, but the germs are evolving to be resistant to more and more antibiotics.

Find out more about typhoid from the United States’ CDC

Learn by doing: look at your own drinking water under a microscope
More about typhus
More about cholera
More about dysentery

Bibliography and further reading about typhoid: