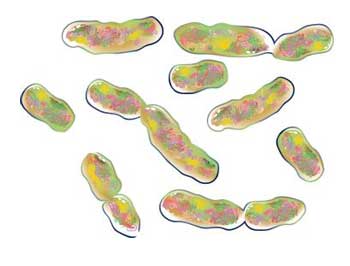 When cells use meiosis to reproduce, there’s a daddy cell and a mommy cell. Each parent cell makes a new cell with a copy of half of its DNA, and then the daddy’s half cell mixes with the mommy’s half cell to make a new baby cell. That’s how you were made, and that’s how baby plants are made too.

Meiosis and the alternation of generations allowed for much faster evolution, with all this mixing up of DNA, and so plants began to change much faster than they had before. Soon there were plants with more than one cell, like seaweed. When these plants grew bigger, they did that by dividing their cells using mitosis, as usual (that’s how you get bigger too). But if they wanted to make a whole new baby plant, they needed a way to reproduce the whole plant, not just one cell at a time.

When all the plants still lived in the ocean, they could exchange sperm and eggs just by letting them loose into the water and hoping they would bump into each other as they floated around. But when the first plants like moss began to live on land, about 540 million years ago, they developed a way to reproduce using spores instead.

Spores worked well for the moss, and also for the ferns that evolved later on, about 400 million years ago. But these spores counted on falling on to wet ground; if they didn’t find wet ground they just died. When plants began to spread on far from the edges of streams, they needed a way to protect baby cells that fell on dry land. That’s when the earliest plants gradually evolved hard covers for their baby cells, or seeds. The first seed plants appeared around the end of the Devonian period, about 360 million years ago, and during the Permian period there were lots of seed plants, mainly pine trees, all over the land.

Beginning around the same time, a few plants were developing new ways to help out their reproduction: flowers, and fruit.