What is a yurt? Central Asian architecture 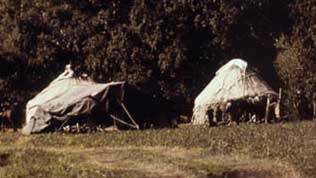 Yurts- the houses of Central Asia

What do nomads live in?

The nomadic people of Central Asia generally lived in yurts, portable houses made of a foldable wood frame with felted wool coverings over it. (This is actually a lot like our houses, which are also wood frame and sometimes use felt for insulation). These are some yurts.

History of wool
What is felting?
All our Central Asia articles

Other people, mainly in Russia, lived in small houses built from wood, like American log cabins. Log cabins were originally a Scandinavian idea, and the Vikings may have brought them to Russia.

Who were the Vikings?
History of Russia 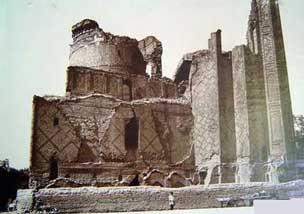 By the Early Middle Ages, as Central Asian people got richer and stronger from the Silk Road, they built stone palaces for their leaders. At Kara Balgasun about 700 AD, the Uighurs had a strong mud wall with watch towers around their city.

Who were the Uighurs?
More about mud-brick

The Khitan also built big mud walls around their cities in the 900s, and Buddhist stupas like the earlier ones in India. At Karakorum, the Mongols built a stone palace that resembles Chinese palaces. In the 1200s Karakorum had paved streets, temples, mosques, a church, and walls all around it. 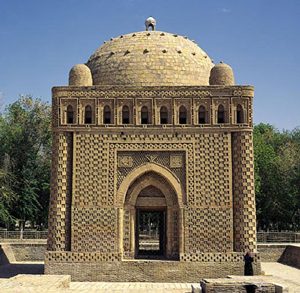 This tomb has some of the earliest pointed arches in the world, probably inspired by Islamic architecture further west. The Seljuk Turks built more mosques in Central Asia about 1000 AD. Soon after that, many people in Russia converted to Christianity and started to build churches like the ones they had seen in Constantinople.