People first began to weave cotton in India, also around 2000 BC, but cotton weaving soon spread to Egypt, and all down the east side of Africa. By the 400s AD, the people of Meroe and Kush were growing and weaving cotton for their clothes. Before 800 AD, people in East Africa were trading with India for cotton and silk cloth in fancy patterns, and for glass trade beads. Around this time, somebody in East Africa or Egypt invented knitting. 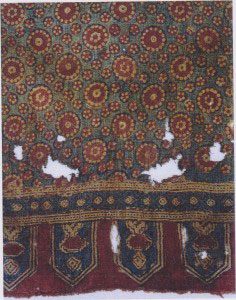 Another Indian cloth imported to Cairo
(Now in Oxford, England)

Then people in East Africa began to dress a lot like the Indian people they traded with. Women wore tight pants under loose pleated skirts, with thin veils. By 800 AD, traders were bringing cotton cloth from India to Central Africa. 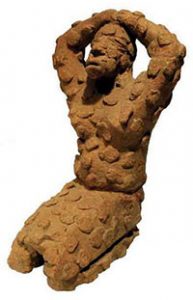 Then by about 1000 AD, West Africans were importing cotton cloth too, across the Sahara Desert from North Africa, and soon in this area many people wore cotton clothing, though poorer people still wore goatskins. 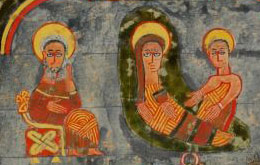 Birth of Jesus, painted in Ethiopia ca. 1300 AD. The clothing seems to be striped in different directions.

By about 1100 AD, people were growing and weaving cotton in West Africa too, and all across the Lake Chad area, producing local versions of Indian cloth. Benin, in West Africa, started exporting their own cotton cloth. By the 1400s, East African trading cities like Mombasa and Malindi were sending their own trading ships to Gujarat, in India, to buy cotton and silk cloth.

Wool came pretty late to Africa, because even though people in West Africa were keeping sheep by the 400s AD, the kind of sheep they kept didn’t grow wool. They were only good for eating. But in North Africa, people did wear wool from their sheep. They also used the wool to weave tents, blankets, and rugs on vertical looms. When camels started to be common, people also began to weave camel hair for clothes.