Who is Astarte? West Asian religion

The goddess Astarte in the Late Bronze Age

As early as about 3000 BC,  Astarte was a Semitic goddess of love and fertility. People worshipped her in Mesopotamia and in the Levant.

Like the Roman goddess Venus or the Greek goddess Aphrodite, Astarte started out as the goddess of the evening star. (And soon West Asian astronomers realized that the evening star is really the planet Venus.)

So Astarte is a lot like Aphrodite and Venus in many ways. Indeed, the Greek goddess Aphrodite may have originally been a version of the Phoenician Astarte.

Astarte as the wife of Baal

People worshipped Astarte mainly among the Phoenicians, and especially on the island of Cyprus.

Who were the Phoenicians?
More about Baal
The early Jews and Astarte

But her worshippers thought of her a little differently in the Eastern Mediterranean. Here people thought of Astarte as the wife of Baal, the main Phoenician and Canaanite god. Probably early Jews also worshipped Astarte and Baal along with Yahweh. They sometimes thought of Yahweh as a brother of Baal. 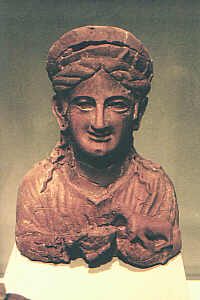 The goddess Astarte had a lot in common with the Sumerian goddess Ishtar. By the time of the New Kingdom, about 1300 BC, people also worshipped Astarte in Egypt.

Who was Ishtar?
More about Isis

All through the Hellenistic and Roman periods in West Asia people kept on worshipping Astarte. People probably worshipped Astarte in Sassanian Iran, too. But when most people converted to Christianity and Buddhism in the 400s AD, they stopped thinking about Astarte so much.

Eventually, Astarte’s powers to help women with having children became part of Mary‘s powers, or went to various Christian saints and Buddhist boddhisatvas.

Bibliography and further reading about Astarte: