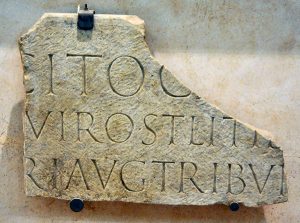 The tombstone of Tacitus

Tacitus’ work is as well known for his skill in writing history as it is for the value of the facts he presents. His beautiful and efficient phrasing, his ability to bring characters to life with only a few words, his willingness to present the information fairly and in a straightforward way, all have inspired generations of historians to try to imitate him.

Tacitus was born about 55 AD. His wealthy father Agricola was a commander of the Roman army in Britain. It was not long after Claudius conquered Britain and made it into a Roman province. Probably Tacitus also spent some time in Britain, and perhaps at other army outposts. But most of his time was spent in Rome. He was an active senator, with a successful political career, and a very famous public speaker.

His first book, written in 98 AD when Tacitus was in his early 40s, was a biography of his father. He called it the Agricola. In it, Tacitus discusses the problems of taking over a new province (Britain). How do you respect the rights of the conquered? Should they just abandon their own culture and become Roman? Do the benefits of being Roman – education, nice clothes, job opportunities – make up for the loss of freedom? What about the humiliation of being conquered?

Tacitus’ second book, written in the same year, was an account (an ethnography) of the way of life of the Germans, who had not been conquered by the Romans. It was called the Germania. Here he shows the same problems from the other side. The Germans have their freedom and their pride, which they value highly, and they can maintain their own culture. But they live in huts, they cannot read or write, and they have to farm or hunt for a living. Is this better, or worse, than the condition of the British?

(Your class might want to debate the point, which is still very relevant today: would Mexican immigrants do better to encourage their children to speak English or Spanish? Should they hope for them to become fully Americanized? What does that mean? What are the benefits or disadvantages? How about African-Americans, who didn’t come here by choice?)

Between 105 and 109 AD, Tacitus wrote the Histories, which was a political history of his own time, between 69 and 96 AD, the Flavian period. Tacitus had been involved with politics himself for most of this time, so he knew very well what had happened and why. Unfortunately most of the Histories have been destroyed, and only the part about the year 69 and part of 70 have survived.

Then beginning in 112 and continuing until his death sometime after 117 AD, Tacitus wrote a history of politics from the death of Augustus to the death of Nero (14-69 AD): the Annals. This was his longest and most ambitious work, but it too was partly destroyed. Even so, with the works of Suetonius it is our most important source for the history of the Julio-Claudians.

In both of these historical works, Tacitus again seems to be saying that freedom, even in poverty, is worth more than wealth in captivity. He hates it when the Roman emperors overrule the Senate (remember he was a senator himself). He wishes for the days when the Roman Senate ruled without an emperor. Tacitus argued that freedom would be worth the civil wars and bloodshed that came with it. But most Romans were willing to give up their freedom for safety.

Learn by doing: how do you feel? Since 9/11 Americans have been debating whether it is worth giving up some freedoms in order to fight terrorism and have more safety – is that right?

Bibliography and further reading about Tacitus: