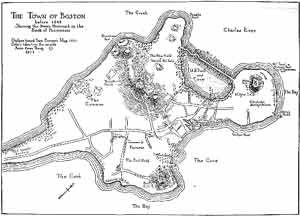 Boston in the time of Anne Hutchinson

Anne Hutchinson was born in 1603, the same year that Queen Elizabeth died. Her father was a Puritan minister in England. Like Margaret Cavendish about the same time, Hutchinson was home-schooled with her brothers and sisters. She became a Puritan like her father.

Who were the Puritans?
More about Margaret Cavendish
All our American History articles

Hutchinson was a Puritan

Hutchinson liked the Puritan idea that faith – believing in Jesus – got you into Heaven, and not works – doing good things. She held regular meetings in her house where she preached the importance of faith to other Puritans – both men and women. In the Gospels, Jesus says things like that, and Martin Luther said this too in the 1500s.

Who was Martin Luther?
More about Jesus

By the time Anne Hutchinson was 43 years old, many Puritans were fleeing from King Charles, who was arresting and killing Puritans, to Algonquin land in North America. Hutchinson and her family left England too. They moved to Boston.

They had a big two-story house, flocks of sheep, and a very good business selling cloth to Bostonians. Hutchinson hoped that the new city of Boston would be a place where women could be equal to men, and where all people could be free. She wanted the Puritans to be more friendly with the Algonquin.

Anne Hutchinson preached that people should obey God’s law, not the laws of men. Sometimes she seemed to be saying it didn’t matter even if you did bad things. As long as you believed that Jesus could save you, He would. Hutchinson’s ideas were very popular, especially with rich people who wanted to enjoy themselves. Sixty people at a time came to hear her speak, including the young governor of Massachusetts.

But the men in charge of Boston didn’t like Hutchinson’s ideas. They thought Boston should be a chance for them to hold power and tell people what to do. Boston ministers and judges accused Hutchinson of heresy and disobedience. They put her on trial for what they called her antinomian philosophy – being against rules and laws – then forced her to leave Massachusetts, three years after she got there.

She moves to Rhode Island 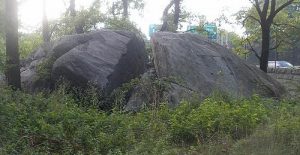 Hutchinson and her children moved to Rhode Island. Dozens of her followers came with her. They elected a new governor, but after only a few months Hutchinson objected to that governor pushing people around too. She made her husband governor instead.

Then Hutchinson began to preach that people should live without any government at all. Like the early Christian Montanus, she said that men and women should make their own decisions, consulting God directly through prayer, not through ministers. She urged her followers to be peaceful, and not fight wars, and refused to have guns in her house.

After Hutchinson’s husband died, Massachusetts threatened to take over Rhode Island. So Hutchinson took her younger children and left for New Amsterdam. She started a new farm on Algonquin land, where the Bronx is now. It was near a landmark called Split Rock, which is still there. A few years later, Algonquin people killed her and most of her children. They were angry because the governor of New Amsterdam was trying to expand his territory into their land.