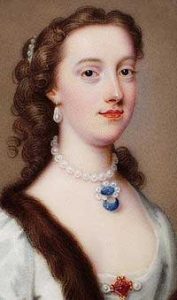 Who was Margaret Cavendish?

Margaret Cavendish was a little younger than Hobbes and Descartes, but she knew both men. She had many philosophical debates with them when they were all living in Paris.

More about Hobbes
And about Descartes
All our Europe articles

Cavendish proposed that even things that seemed separate from your body, like thinking or dreaming, were really just part of the working of your brain.

Like other girls in the early 1600s AD, Margaret didn’t get to go to school. But her family had enough money so that she and her seven brothers and sisters had a tutor at home. When Margaret was 21, in 1644, she traveled to France as the queen’s maid of honor, and lived at the court of Anne of Austria. She was homesick at first, but her mother convinced her to stick with it.

Who was Anne of Austria?

Cavendish gets married and is exiled to France

A year later, Margaret got married to a much older man, and took the name Margaret Cavendish. Cavendish’s whole family – her brothers and sisters, and her husband – were all supporters of King Charles against Cromwell, so Cromwell exiled them from England and they had to live in France. Like most other European philosophers, Cavendish did not have any children.

What did Cavendish think?

Cavendish started publishing her writing in 1653. Where Hobbes had recently said that souls were not separate from bodies, Cavendish took a step further and said she didn’t believe people had souls, or that God made things happen. Instead, Cavendish saw the world, and everything in it, including people, as entirely made up of natural materials and natural causes. She pointed out that falling on your head can injure your brain so you can’t think right. So thinking must be something physical that injuries can affect. Also, what you eat can affect your mood. How could that happen if your mood was not created from natural materials?

In 1660, when King Charles II got back into power in England, Cavendish and her husband were able to go back to England. A few years later, Cavendish published her Orations, arguing for freedom and equality for women. In 1664, she published a collection of her letters. She argued that people are not special, but just like other animals. It’s only because we are people that we seem special to ourselves.

Like Hobbes, Cavendish found it hard to believe in God, and she thought people would run wild without a king to rule them. Like Descartes, she thought scientists should start by reasoning rather than experimenting, because we can’t trust what our eyes and ears seem to tell us. In 1668, Cavendish published a novel about an imaginary world, The Blazing World. In the novel, a young woman becomes the empress of a world of talking animals. Then she leads her army to invade Earth and take it over.

Why did Cavendish die so young?

Cavendish died, maybe of a stroke or of heart failure, in 1673, when she was fifty years old.

Bibliography and further reading about Cavendish: