Parts of a Church – Architecture

The shape of a cross

Medieval architects designed most Romanesque and Gothic churches starting with the design of a Roman basilica. But many churches added a part coming out crossways. That made the whole church take the shape of a cross.

What is a transept?

This cross shape gave you more room for people to see the mass. And it reminded people how Jesus died on the cross. The sideways part was called the transept.

Who was Jesus?
What is Christian mass?

Why did churches have the door on the west side?

Generally architects designed the church with the front, or façade (where people came in) to the west. The altar (where the priest stood to say Mass) was to the east, facing Jerusalem where Jesus was crucified.

The choir and the apse

What is a nave?
More about aisles
And double aisles

People stood in the nave to watch the priest say Mass. The aisles were the side parts off the nave. In the Middle Ages, churches usually didn’t have chairs in them, and people stood up, or they brought their own folding chairs.

The roof of the church 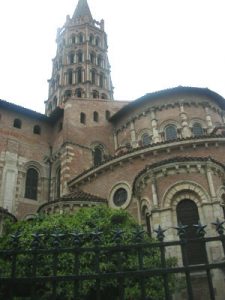 Early churches had wooden roofs, but later on they had stone roofs. You can’t build a flat stone roof, so these stone roofs were vaulted: curved. They might have a barrel vault, or a groin vault. To help hold up these heavy stone roofs, churches had stone buttresses, and sometimes even flying buttresses.

What is a barrel vault?
What’s a groin vault?
So what is a buttress?
And what’s a flying buttress?

Early churches had a tower right over the altar, in the center of the church where the transept met the nave. But later on, people built churches with a separate tower like an Islamic minaret, or a Chinese pagoda. Even later, many churches had two bell towers on the front.