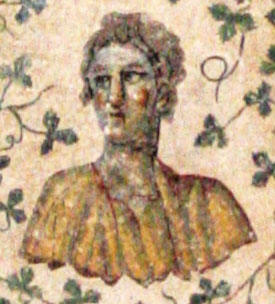 The Lawyer’s Tale: This is probably a picture of either the real Constantina or her mother Helena (Santa Costanza church, Rome)

In the time of the Roman Empire, says the lawyer on Chaucer‘s pilgrimage, there was a Christian princess Custance, the daughter of the Emperor, who was very beautiful and good.

Who was Chaucer?
The Clerk’s Tale
The Wife of Bath’s Tale
Medieval Literature
All our medieval Europe articles

Custance and the Sultan of Syria

When merchants told the Sultan of Syria about Custance, he wanted to marry her so badly that he agreed to convert from Islam to Christianity for her, together with all his men. So the Emperor agreed to let the Sultan marry Custance. Custance was sad to leave her father and her home, but she had no choice.

Saladin (the Sultan of Syria)

But the Sultan’s mother – an evil woman – didn’t like all this converting from Islam to Christianity. When Custance and the Sultan and all the court came to a feast at her house, the Sultan’s mother had all of the Christians killed, even her son the Sultan, except for Custance herself (God saved her, the way he saved Daniel in the lion’s den).

Custance’s adventures on the way home

The Sultan’s evil mother put Custance on a boat and sent her off towards Rome all alone. She’s shipwrecked on the way, and has many adventures, but she’s true to her faith and she’s always good. So in the end she is reunited with her father (who has avenged himself on the Syrians) and marries a good loving Christian man, and has a son who grows up to be the emperor Maurice.

Compare to the Clerk’s Tale

This story is not so different from the Clerk’s Tale about Griselda – the patient woman who is still good even when bad things happen to her. It’s interesting to see what had happened over time to the story, because the real Custance – Constantine I’s daughter Constantina – was nothing like the Custance in the Lawyer’s Tale. The real Constantina was an active participant in the politics of her brother Constantius‘ reign, and married her much younger first cousin Gallus, who was also a Roman emperor.

Who was Constantine?
Constantius and Gallus

Historically, the Lawyer’s Tale has other problems as well – in the time of Constantina, there was no Islam yet, and no Sultans. And the real emperor Maurice lived several hundred years later than Constantina.

You can read the original story online in Middle English here.

Bibliography and further reading about Chaucer: