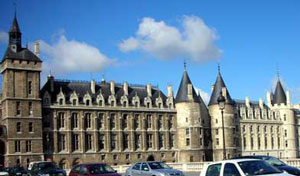 What is the Conciergerie?

The Conciergerie was the castle where the kings and queens of France lived when they were in Paris. (But it wasn’t called that in the Middle Ages.)

What stood here before this building?

Originally this was the Roman fort, where the Roman commander of Paris lived. The Roman general Julian was acclaimed emperor here in 361 AD. This Roman fort lasted for more than a thousand years. The Frankish king Clovis died in this fort in 511 AD.

More about the Romans
The Roman Emperor Julian
Who was Clovis?

The windows of the spiral staircase inside the Conciergerie

By about 1200 AD, the rulers of France were richer and more powerful than they had been before. Blanche of Castile showed it by building the Sainte Chapelle in the courtyard of the old Conciergerie.

Who was Blanche of Castile?
What’s the Sainte Chapelle?

But the old fort itself was so old it was falling down. It needed to be replaced, and now the kings could afford to do it. About 1300 AD, King Philip IV tore down the old castle and built a beautiful new castle on top of it. This is the castle you can still see today, which we call the Conciergerie.

The Conciergerie was built in a time when kings might still need to defend their houses against attacking enemies (or, more likely, mobs of angry citizens). It has strong thick walls and towers all around the outside, with little narrow windows so that you could shoot arrows out of it but not into it. Inside, facing the courtyard, they could have bigger windows.

The windows you see in this picture are for a spiral staircase. See how the windows on the left are higher than those on the right? Spiral staircases saved space when you had to build a castle you could defend from enemies. 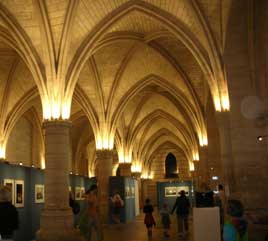 Basement dining hall of the Conciergerie

In the basement there was a huge room where the castle servants ate their dinners and slept, and big castle kitchens with huge fireplaces.

Upstairs there was another huge room for the king’s banquets. This was also where the king gave judgments on the most important court cases. You could compare the Conciergerie to the Alhambra palace in Spain, built a little earlier, in the 1250s AD.

More about the Alhambra 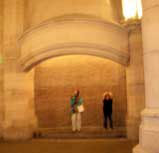 Big fireplace (with kids inside it)

Why do we call it the Conciergerie?

The Conciergerie was only a king’s palace for a short time. In 1358, during the Hundred Years’ War with England, the king, Jean II, was frightened by a revolt of the people of Paris and decided to move across the Seine river to the new castle of the Louvre.

The Conciergerie stood empty for a little while, but by 1400 Charles VI made the old palace into a prison. That’s why it’s called the Conciergerie, because a concierge is a guard. Today, while the oldest parts are a museum, newer parts of this building are the courthouse for Paris.

Learn by doing: a project about castles.
Another castle in Paris: Vincennes