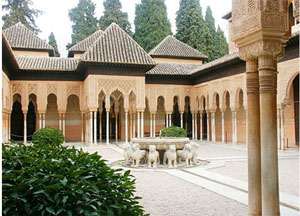 By 1250 AD, the Christian kings of Spain had pushed the Almohads south so that they only ruled just the city of Granada, far in the south of Spain. Because they were such losers, the Almohads in Granada were soon overthrown by new Islamic rulers called the Nasrids. There in Granada, the Nasrids built their palace, the Alhambra (it means “the Red” in Arabic, probably because of the red color of the bricks). Because the Christian kings were still trying to get the Nasrids out of Spain, the Alhambra is first of all a fortress.

A tour of the Alhambra

The palace is on top of a steep hill, and it has a fortified wall all the way around it. Originally all the rooms were arranged around a central courtyard, but gradually people added more small courtyards with more rooms around them to make the palace bigger. The outside walls are all plain, with all the decoration on the inside, to show that the palace is meant for insiders and not outsiders.

On the inside, though, the carvers covered every inch of the Alhambra with patterns like lace. In accordance with Islamic rules, they didn’t carve any images of people or animals (though the lion fountain you see here is an exception). Everything is either patterns of leaves, Arabic letters, or abstract geometrical patterns. 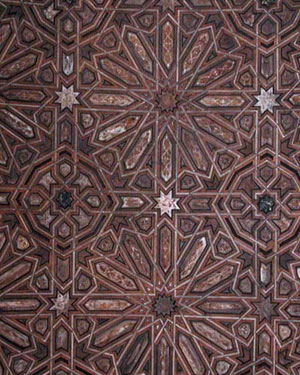 Wooden ceiling at the Alhambra

They also used a lot of glazed clay tiles to decorate the walls. In the courtyards, there are fountains everywhere. Because it is always hot in Granada, they didn’t build many closed rooms – most of the rooms are open on one side to the courtyards, or separated only by lacy wooden screens.

The builders even carved the ceilings at the Alhambra palace into fancy lace. This is a barrel vaulted ceiling carved out of different kinds of wood, with ivory inlays. Carving by hand, with only iron chisels, this kind of work took years to finish.

Learn by doing: How is your house built to try to keep you warm or cool?
More about the Christian reconquest of Spain

Bibliography and further reading about the Nasrid palaces and the Alhambra: