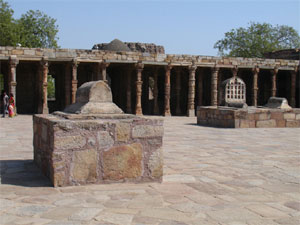 The first mosques in India

Beginning about 1100 AD, invaders from the Abbasid Empire conquered most of northern India. These invaders were Muslims. Muslims needed mosques to pray in. So Delhi Sultanate architecture is all about mosques.

What is a mosque?
More about Islam
The Delhi Sultanate
All our India articles

The sultans got Indian builders to build them a lot of new mosques. The sultans wanted big mosques, to show how powerful and rich the new conquerors were. They built the earliest mosque in Delhi, the Quwat ul-Islam. They built this mosque out of stones from Hindu temples that the invaders tore down. Like West Asian mosques, this mosque has a large courtyard. Around the courtyard, there’s a covered walkway with columns.

One side of the mosque has a prayer hall, also full of columns. Just as the Cordoba and Kairouan mosques in Europe and Africa reused Roman columns, this one reused Hindu columns.

The new Muslim rulers of northern India also built themselves castles. Their castles were like the castles that Islamic rulers were building further west in West Asia. One of these is Tuglaqabad Fort.

The Muslims didn’t conquer southern India. So in South India people kept right on building Hindu temples. A lot of Indian architects and builders who didn’t want to work on Islamic mosques moved to southern India at this time. Because of that, the Hindu temples in the Hoysala kingdom in southern India started to mix northern and southern styles. They also developed some new ideas. 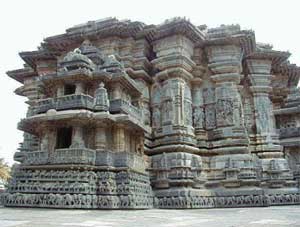 Halebid temple, for example, has five inside rooms instead of just one. The rooms are arranged in the shape of a star, so the whole temple is star-shaped instead of rectangular.

There is just one porch (mandapa) for all of the rooms. The temple has carvings all over. The carvings show the lives of the Hoysala kings and stories about Hindu gods. 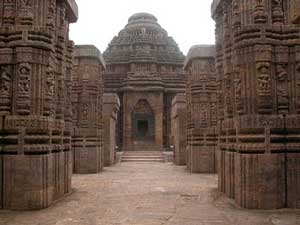 The Konarak Temple is another example of a medieval Hindu temple in south-eastern India. King Narasimhadeva built it about 1250 AD as a temple to the sun god Surya.

The whole temple is shaped like a giant chariot. It’s covered with carvings of demons, gods, elephants, sea monsters, men and women. A carving of a giraffe shows that people from East India were travelling to Africa at this time (as does India’s influence on African architecture.)

Did you find out what you wanted to know about Delhi Sultanate architecture? Let us know in the comments!

Learn by doing: visit a mosque
The Mughal Empire in India

Bibliography and further reading about Delhi Sultanate architecture in India: