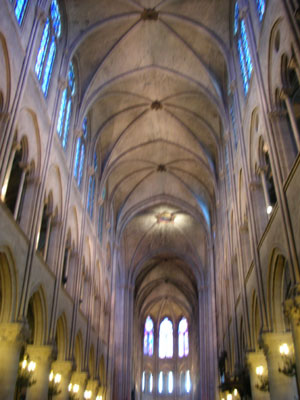 Building the apse of Notre Dame

After they had pretty much finished the nave of Notre Dame of Paris, the builders worked on the crossing. Then they started on the apse. They finished the apse in 1182 AD, and the nave in 1196.

What is an apse?
Start of Notre Dame of Paris
Medieval architecture
All our medieval Europe articles

Then they began working on the transept. But they soon ran out of money to pay the builders and to pay for the stone. Then the Bishop of Paris, Maurice de Sully, died in 1196 AD. The whole thing had been Sully’s idea! So when he died, it took a while to get going again. In the end, they didn’t finish building the transept and the front towers until 1267 – a hundred years after they started work on the cathedral.

But it’s already out of date?! 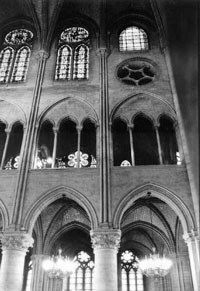 The new elevation at Notre Dame of Paris: bigger windows

But by that time, the people of Chartres had already built their cathedral. Chartres was higher than Notre Dame and had bigger windows that let in more light. Even though Notre Dame was just finished, it seemed a little old-fashioned.

So the builders at Notre Dame in Paris ripped out the small round windows all down the nave. They put in bigger windows, except for the walls right next to the crossing, where the walls needed to be stronger. There you can still see the original small windows. (Although, because they are blocked by other supports, these windows don’t let in any light.)

Adding chapels all around the cathedral

At the same time, the builders also added a lot of little chapels to the sides of the cathedral, along each of the side aisles, and also around the apse. This was because it had become the custom that each priest should say Mass separately every day. All the little altars in the little chapels made room for all the priests to say Mass.

What is Mass?
What are priests?

What did people use Notre Dame for?

They held large public lectures there, and public ceremonies and meetings. Professors taught classes there. In emergencies, you could use it as a hospital. When Louis IX came home from the Seventh Crusade with the Crown of Thorns, he kept it in Notre Dame while he was building the Sainte Chapelle (and actually they keep it in Notre Dame now) (and yes, it was saved from the fire).