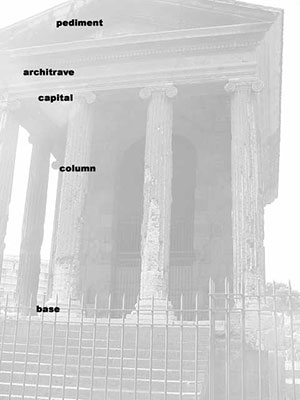 Ionic order: the parts of an Ionic temple

A new way to build temples

Around 500 BC, Greek architectural styles changed so that instead of building temples in the old Doric style, people began to want their new temples for the gods to be built in the new Ionic style.

Ionic temples are a little fancier and more delicate than Doric temples, without being as elaborate as Corinthian temples. The details of Doric temples imitated older wooden temples, but in stone.

How about the Corinthian order?

By the time people were building Ionic temples, they weren’t thinking so much about the old wooden temples anymore. Instead, they wanted to make their temples seem more delicate and lighter, like they were going to lift off into the sky and go up to the gods, even though they were built of heavy stone.

In Ionic temples, architects replaced the beat of the triglyphs and metopes on the architrave with a running frieze. In musical terms, you might say there was less emphasis on the beat and more on the melody.

Differences between Doric and Ionic

What are triglyphs and metopes?
What are fluted columns?

Did you find out what you wanted to know about the Ionic order in Greek architecture? Let us know in the comments!