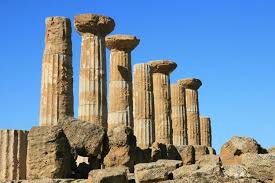 In early Archaic Greek temples, the columns and the roof were made of wood. To keep the wood from rotting, Greek builders put a flat stone under each column. And to help the columns support the weight of the roof, they put a block of wood at the top of each column.

But soon the Greeks started to build in limestone. Limestone was more impressive than wood and would last longer. The earliest stone temples have big thick columns, and heavy Doric capitals (that block of wood at the top of the column, only now made of stone) that look like pillows. You can see them in this picture from the temple of Herakles in Agrigento on the island of Sicily, built in 510 BC. 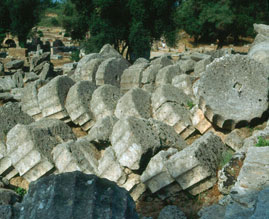 Flutes on column drums at Paestum, Italy (They fell down in an earthquake)

The thick stone columns were built out of column drums. Column drums are short cylinders of stone piled on top of each other to make a column. The columns had fluting carved into them, to make them seem lighter. The flutes copied the woodworking marks that people were used to on the old wooden columns.