Agamemnon – a play by Aeschylus 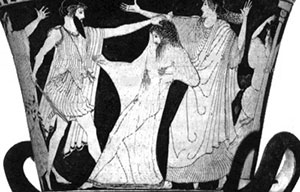 Athens, about 460 BC, by the Dokimasia Painter (from left to right, Clytemnestra, Aegisthus, Agamemnon, Electra, and Cassandra). Now in the MFA, Boston

A play by Aeschylus

The Agamemnon is the first of a cycle of three plays written by the Greek playwright Aeschylus.

Who was Aeschylus?
More Greek literature
All our Ancient Greece articles

The backstory of Agamemnon

When the play begins, King Agamemnon is still away at the Trojan War. His wife Clytemnestra (kly-tem-NEST-ra) and his young children, Orestes (a boy) and Electra (a girl) are at home in Mycenae. But Clytemnestra is very angry at Agamemnon for killing their oldest daughter Iphigeneia, and she has been letting a cousin of Agamemnon’s named Aegisthus rule the kingdom while he was away, instead of keeping it safe for her husband. His whole family is under a curse because of terrible things his father, grandfather, and great-grandfather did.

What’s the Trojan War?
Why did he kill Iphigeneia?
The curse of Atreus 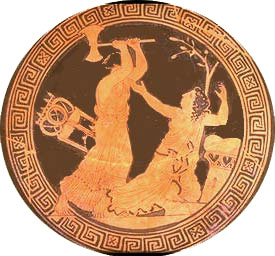 When Agamemnon gets home, he acts very arrogant. He does not pay the gods the respect that they deserve. For instance, he walks on a red carpet to the door of his house, even though red carpets should be sacred to the gods. This is hubris, and the gods punish it.

As soon as Agamemnon gets inside the house, Clytemnestra and Aegisthus murder him (off-stage; in Greek plays the action usually takes place off-stage).

Clytemnestra also kills Cassandra, a Trojan priestess whom Agamemnon has brought home as his slave.

One interesting thing about this play: the usual thing in Greek play competitions was that you could only have two speaking actors on stage at any time. So if two people on stage had already spoken, you knew nobody else would speak.

But Aeschylus got permission to have three speaking actors. In the scene where Clytemnestra kills Agamemnon, both Clytemnestra and Agamemnon had already spoken. They’d assume Cassandra must be played by a non-speaking actor. So it must have really shocked the audience when Cassandra suddenly screams.

Learn by doing: a Greek play-reading
Another play by Aeschylus: Libation Bearers