Climate change and the Philistines

Did climate change cause a Bronze Age crisis? 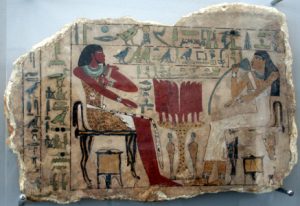 Tomb stela of Nemti-ui, from the First Intermediate Period. The stele’s only painted, not carved, because people couldn’t afford carving after the climate change collapse.

But even as people created the world’s first cities and governments, the world continued to get warmer. This may have been caused partly by farming itself. Maybe the farmers cut down too many trees that had been taking carbon dioxide out of the atmosphere.

What happened to the cities? 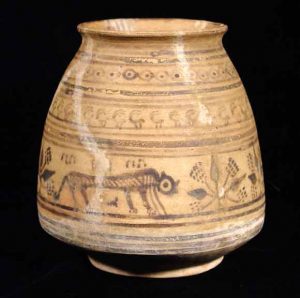 Harappan pottery from the Indus Valley, about 2000 BC

By about 2000 BC, it was so warm that even in the river valleys, there really wasn’t enough water to keep the civilization going. In some places, like the Indus valley in Pakistan, people gradually abandoned their cities. Probably a lot of people starved to death, and the rest moved up into the hills where it was cooler and rained more.

In Egypt, this warming may have caused the First Intermediate Period. The same changes may have encouraged the Yamnaya or Indo-Europeans to leave Central Asia and invade West Asia, Europe, and eventually Egypt and India. 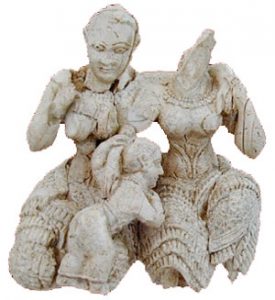 Around 1200 BC, at the end of the Bronze Age, there was another drought, and Egypt’s government collapsed again.

This drought also seems to have ended the Hittite kingdom and driven the Mycenaeans out of Greece, to invade Israel as the Philistines (This is where the Bible stories of David and Goliath and Samson and Delilah come from). The same drought may have ended the Shang Dynasty in China, too.

Did you find out what you wanted to know about climate change collapse? Let us know in the comments, or go on to the Little Ice Age.