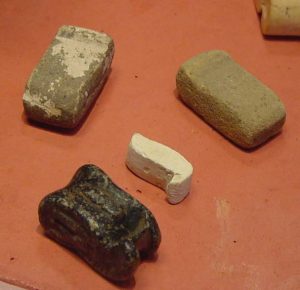 Egyptian board games: senet and mancala

The Egyptians learned other games from their West Asian neighbors.

How to play Senet

The Ancient Egyptian game of senet was a game for two people. You each got five pieces, and to win the game you had to be the first to get all of your pieces off the board.  The board had three rows of “houses” (spaces), with ten houses in each row. You started with one player’s pieces on the first, third, fifth, seventh, and ninth house, and the other player’s pieces on the second, fourth, sixth, eighth, and tenth houses.

Instead of rolling dice, you tossed four sticks to decide how many spaces you could move on each turn.

Only one piece can be on a space at a time. But there are more special rules. You can read about them here.

(How to play Mancala) 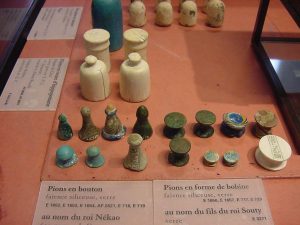 They played games with dice, too.

(More about the history of dice)

One popular board game was Hounds and Jackals (though we don’t really know what the Egyptians called it). You threw knucklebones to decide how many holes to move your piece, and the pieces were tall sticks with the heads of dogs or jackals. 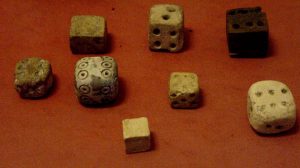 Egyptian kids also had toys to play with. They had clay rattles and little animals and people shaped out of clay. If you could afford them, you could also get wooden toys. Some wooden toys had moving parts, like a hippopotamus with jaws that could open and close. 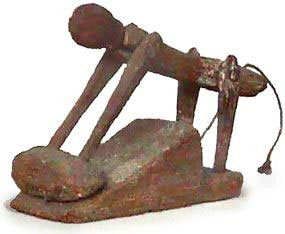 This one has a woman grinding grain: you pull the string to make her move the grinding stone back and forth. The fanciest dolls were made of cloth, and stuffed with papyrus reeds. 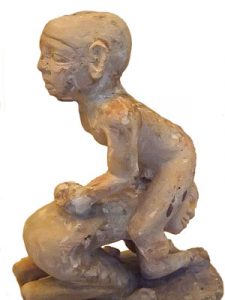 Ancient Egyptian boys and girls were outside nearly all the time, because their houses were small, dark, and crowded.

(More about houses in ancient Egypt)

Ancient Egyptian kids liked to play running and jumping games. Boys and girls loved to swim in the river to cool off and get clean; they knew how to swim the breast stroke and the crawl stroke.

(More about the history of swimming)

They also liked to wrestle and box, and dance in circles. On the right, the two boys are wrestling. One boy is sitting on the other boy’s head.

The girls called one dance “pressing the grapes“; that’s the dance in the picture to the left. They’re holding hands in a circle.

Kids made balls out of leather or woven papyrus and stuffed their balls with straw or (once horses came to Egypt) horsehair, to play ball games like juggling.

Looking for a second source to cite? Check out this article from the Ancient History Encyclopedia.

Did you find out what you wanted to know about ancient Egyptian games? Let us know in the comments!

More about dice
And more about swimming
More about African games