Who was the Egyptian god Ra? 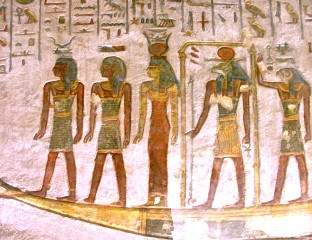 The sun god Ra on his solar boat, traveling across the sky from east to west. From the New Kingdom tomb of Rameses III in the Valley of the Kings.

Ra (sometimes spelled Re) was the ancient Egyptian god of the sun. He was already well known in the Old Kingdom, by 3000 BC. Ra was one of the most important gods of the Old Kingdom.

Before that, there wasn’t any writing, so we don’t know – people may have worshipped Ra as the sun god long before the Old Kingdom, far back into the Stone Age.

Just remember: There is but one God! He is the Sun God! Ra! Ra! Rah!

Read more about the Egyptian gods
All our Ancient Egypt articles 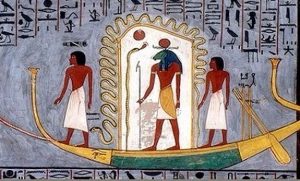 Another image of the Egyptian sun god Ra, from the tomb of Rameses I. Here the god Ra has the head of a falcon.

Ra had the sun (a circle) balanced on his head, as you can see in the picture. In the top picture, Ra wears a long narrow red tunic. Red was an expensive dye, so only rich, powerful people (like the sun god) could wear red. And because the sun can seem red at sunrise and sunset, it’s a very appropriate color for a god.

The head of a falcon

In other images, like this one, Ra has the head of a falcon. Falcons fly very high and see everything, so that’s why people associated them with the sun. And they thought of the falcon as the king of the birds. Earlier, falcons had been the bird of the god Horus, but by the New Kingdom, people often thought of Horus and Ra as kind of the same. They called this combined god Ra-Horakhty.

Often the god Ra has snakes around him, or around the sun disk on his head. These snakes are cobras. Cobras shed their skin and are (metaphorically) reborn. So they seemed related to the sun, which also dies every night and is reborn every morning. Both the sun and cobras were symbols of rebirth, so people painted them on the walls of their tomb, hoping to be reborn themselves into the Egyptian afterlife.

Read more about the Egyptian afterlife

The sun boat sails from east to west 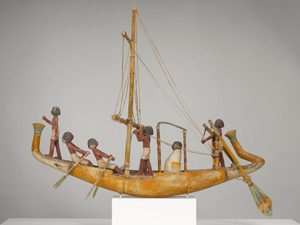 Egyptian model of a boat

Why does the god Ra sail in a boat?

You could compare Ra to the Indian god Vishnu or to the Greek god Helios. The Greek sun god travels in a horse-drawn chariot, because the Greeks usually traveled in horse-drawn chariots, but the Egyptian sun god travels in a boat, because Egyptians usually traveled by boat up and down the Nile River. In the Old Kingdom, the Egyptians didn’t have horses or chariots yet.

In Egyptian stories, Ra created the world and everything in it. He called all the animals and plants into life by speaking their secret names. Then Ra used his own tears and sweat to make the first people.

By 2000 BC or 1500 BC, in the Middle Kingdom or New Kingdom, people were telling the story of the Sky Cow. In this story, after Ra created the animals and plants and people, they all lived happily together at first. It’s another version of the Enuma Elish story of the Flood, which was at least 500 years earlier. Later on, other versions of this story became the Bible’s Tower of Babel, Noah’s Ark, and Sodom and Gomorrah.

Babylonian Flood Story
Tower of Babel
Noah and the Flood

But then, people went bad! They were totally ungrateful and evil! They didn’t sacrifice to the gods and thought only about themselves. People even started to plot ways to overthrow Ra! So the god Ra decided to punish the people he had created. He sent the cow goddess Sekhmet to trample all over them with her giant cow body. Sekhmet ran all over the earth. She trampled people to death. She knocked down buildings in the cities. And she trampled the wheat and barley standing in the fields.

Ra stood up in the sky, watching Sekhmet trampling everything, and he was pretty happy about it. He thought it served people right. But the other gods – Horus, Isis, Osiris – said, “Hey Ra, don’t you think that’s about enough now? If Sekhmet kills all the people, who will be left to learn the lesson? Who will sacrifice to us then?” So Ra figured out how to stop Sekhmet.

Who was Isis?
The Egyptian god Osiris

He gets a big batch of beer from the beer goddess, Tenenet, and dyes it red, and sends it down to earth. The crazy Sekhmet thinks the beer is blood, and drinks it all. She gets drunk and falls asleep. When she wakes up, the madness has left her. She’s turned into the gentle cow-goddess, Hathor.

Egyptian people thought of Hathor as another form of Sekhmet, and both of them as forms of the mother goddess Mut. (You could see all of this as a story about how men have to control irrational women. But then the Bible just writes women almost entirely out of the story. The only remnant is Lot’s wife.)

Sometimes Egyptian painters showed Hathor with Ra’s sun disk as a red circle on her back.

How did people worship the god Ra?

Where did cattle come from?

Ra in the New Kingdom: Amun-Ra

In the New Kingdom, as people started to worship Amun as the sun god, they again combined Ra and Amun, praying and sacrificing to Amun-Ra. Because of this association with Amun, the pharaoh Akhenaten, who rejected Amun, also didn’t let people worship Ra. But after Akhenaten died, people went back to worshipping Ra (and Amun) again.

Egyptian astronomy and the god Ra

Even the New Kingdom, probably nobody knew that the sun was not really the god Ra. Egyptian astronomers were busy calculating the movements of the sun through the year, so they could predict the summer solstice and the winter solstice, and the all-important Nile floods.

By the time the Greek Ptolemies were ruling Egypt, in the 200s BC, however, Egyptian astronomers like Eratosthenes knew how far away the sun and the moon were from earth. They knew that there was nothing like the solar boat or chariot. Still, people kept on worshipping Ra anyway.

The end of the god Ra

People kept on worshipping Ra all through the Greek and Roman periods in Egypt, until people in Egypt converted to Christianity in the 300s AD. At that point, the worship of Ra pretty much ended.

Bibliography and further reading about the Egyptian god Ra: