An eclipse of the moon. You can see the curved shadow of the Earth. Watch an eclipse as an astronomy project!

Dance the Earth and the Sun…

To get a better idea of how the Earth moves around the Sun, work in groups of three people. One person is the Sun and stands in the middle, just standing still.

What is the Sun made of?
How old is the Earth?
What’s centrifugal force?
All our physics articles

The second person is the Earth, and slowly walks (or wheels) in a large circle around the Sun while spinning around like a top at the same time (this is pretty hard; take it slowly).

The third person is the Moon, who walks (or wheels) in small circles around the Earth, always facing towards the Earth. Once you get some practice, trade places so everyone gets a chance to be the Earth. This astronomy project is fun, and also really gets you to understand how the Earth moves!

How do we know the Earth is round?

You can see for yourself that the Earth is round like a ball. One way is to observe an eclipse of the moon.

Eclipse of the moon
More about the Moon
Another moon project

When you see the shadow of the Earth on the Moon, you will see that the shadow is curved, because the Earth itself is curved like a ball. Here’s a video of an eclipse of the Moon, in case you’ve never seen one yourself:

Watching ships on the horizon

Another way to see that the Earth is round is to go to a seaport and watch ships disappearing over the horizon: the bottom part of the ship vanishes first, and then the top. That’s because the earth is curved. If the earth were flat, the whole ship would gradually get smaller until you couldn’t see it anymore.

If you travel, and know how to recognize the constellations, you can also see that different stars appear in the sky from different parts of the earth.

What are stars made of?

If the earth were flat, we should all see the same stars. Today, of course, we also know the Earth is round because astronauts go in spaceships to the Moon, or to the space station, and look at the Earth from there.

Seeing the moon upside down

If you move from the Northern Hemisphere (Europe, northern Africa and Asia, the United States and Canada) to the Southern Hemisphere (South America, Australia, southern Africa), you’ll see that the features of the Moon are upside-down from what you are used to, as in these photos: 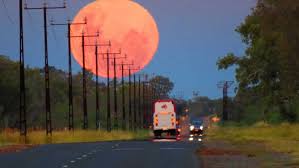 This photo was taken in Australia

This photo was taken in Canada

Oh, this is fun! An orrery is a mechanical model that does the same dance when you turn a crank. It’s one of my favorite words. This video shows how to make your own orrery, as another astronomy project.

More about the Earth