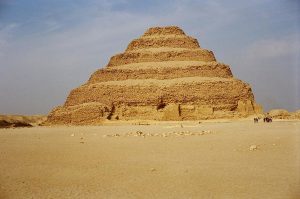 What are the Pyramids?

Like the Sumerians at the same time, the Egyptians around 3000-2500 BC devoted a lot of energy to building big buildings. The Egyptian Pyramids at Giza are one of the most impressive monuments of the ancient world, and you can still visit them today.

What about ziggurats?
More about Old Kingdom architecture
All our Ancient Egypt articles

The Pharaohs, the rulers of Egypt, built the pyramids as tombs for themselves. The Pharaohs built all the pyramids during the Old Kingdom, so that the greatest remains of Ancient Egypt are also some of the earliest to have been built!

More about the Pharaohs

The first Pharaohs built simpler tombs, called mastabas. These mastabas were square buildings with a room inside for the coffin and the mummy and some things to take with you to the afterlife.

The Egyptian afterlife
How did you make a mummy?

Then the Egyptian pharaohs began to build mounds of earth on top of their mastabas, to make them grander. Ordinary princes and other aristocrats went on being buried in mastabas. The Step Pyramid is one of the first of these new fancy tombs. Doesn’t it look a lot like a ziggurat?

Soon the Egyptians decided to fill in the steps of the pyramid. The first really pointed pyramids were built at Giza. Khufu’s Great Pyramid (shown here) was the tallest building on earth for almost five thousand years, until the Eiffel Tower was built in 1889.

How the Pharaohs built the pyramids

People often wonder how the Egyptians could build such huge buildings so long ago. But really a pyramid is not hard to build, if you have plenty of cheap workers available. They’re just a big pile of cut stones with smoother stones over the top. First they built a small mastaba-style tomb on the ground, in the ordinary way. They moved many large stone blocks to the pyramid from the quarry, a little more than a mile (2 km) away, probably on wooden rollers or on sleds. Then they probably they built long ramps of dirt and then rolled the stones up them. They kept making the ramps higher and longer. When the pyramid was done, they took the earth ramps away again.

More about limestone
What is granite?

The people who built the Pyramids were not slaves, because who could afford to feed so many slaves? They were almost certainly farmers and fishers, who worked on the Pyramids during the winter, when there wasn’t much else to do , as a kind of tax. (And they certainly weren’t the Jews, who aren’t even supposed to have arrived in Egypt until the New Kingdom, a thousand years after the Pyramids were built.)