Romance of the Three Kingdoms hero Guan Yu, in a small statue made during the Ming Dynasty (about 1495 AD)

Luo Guanzhong wrote the Romance of the Three Kingdoms around 1380 AD, during the Yuan Dynasty, but it is about things that happened more than a thousand years earlier, at the end of the Han Dynasty and during the Three Kingdoms period, about 200-280 AD. Luo Guanzhong took stories that people had been telling for a long time and wrote them down as one long story (You could compare this to what Homer did, or the people who wrote down the first part of the Bible).

As with the Mahabharata, the Romance of the Three Kingdoms is a very complicated story with hundreds of characters and many smaller stories inside the main one. People usually read it or told it in bits, not all at once. So this is just a summary of the main story. 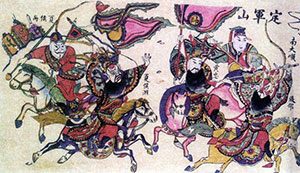 At the very end of the Han Dynasty, the emperors were losing power. Soon the Empire fell apart into three independent kingdoms, which were always at war with each other. Each kingdom had its own king. Liu Bei was the king of one kingdom, Shu Han, in the south-west of China. He was related to the old Han emperors, so he thought he should rule all of China. Liu Bei had two friends who helped him: Guan Yu, who always tried to do the right thing, and Zhang Fei, a fierce warrior. They were known as the Three Brothers (even though they weren’t really brothers). Liu Bei also had Zhuge Liang, a Taoist scholar who gave Liu Bei good advice and sometimes magical help (like King Arthur‘s Merlin or the genie who gives advice to Aladdin in the Arabian Nights).

T’sao T’sao ruled Wei, the kingdom in the north. He was Liu Bei’s worst enemy. T’sao T’sao was a general who was also very smart, and loved to write poetry.

In the south-east, Sun Quan was the king of the Wu kingdom. He was not as strong as Liu Bei and T’sao T’sao. Still, Liu Bei tried to get Sun Quan to help him fight T’sao T’sao. At first Sun Quan did help Liu Bei, and together they defeated T’sao T’sao at the Battle of the Red Cliffs.

But then Sun Quan was afraid that Liu Bei would take over Wu himself. So Sun Quan tried to kill Liu Bei through trickery. He promised to let Liu Bei marry his younger sister, to get him to come to Wu so Sun Quan could kill him. But when Liu Bei arrived, Sun Quan’s mother, Lady Wu, decided that Liu Bei was a good guy and should not be killed, and she wouldn’t let Sun Quan kill him. So Liu Bei got away home to Shu Han, and he got to marry Sun Quan’s sister, too.

After a while T’sao T’sao died, and everybody began fighting again over T’sao T’sao’s kingdom. Sun Quan switched sides and made an alliance with T’sao T’sao’s son, T’sao Pi. Then Sun Quan attacked Liu Bei and killed his friend Guan Yu. But Sun Quan wasn’t able to keep on fighting Liu Bei, because the treacherous Cao Pi took advantage of Sun Quan’s being busy to attack him back in Wu.

Soon after this, Liu Bei died. His son Liu Shan became king of Shu Han, but Liu Shan was too young and weak to be a good ruler. Zhuge Liang, the Taoist, promised to help Liu Shan faithfully, and he was the real power of Shu Han. T’sao Pi tried to attack Liu Shan, seeing that he was weak, but four times he lost his battles. Sun Quan, seeing this, decided to get back on the side of Liu Shan. But Liu Shan and T’sao Pi, and their successors, kept fighting for many years, until finally a descendant of T’sao Pi, Sima Yan, from Wei, brought all of China together again under the Sui Dynasty.

To read the Romance of the Three Kingdoms for yourself:

Romance of the Three Kingdoms, by Luo Guanzhong (1999).