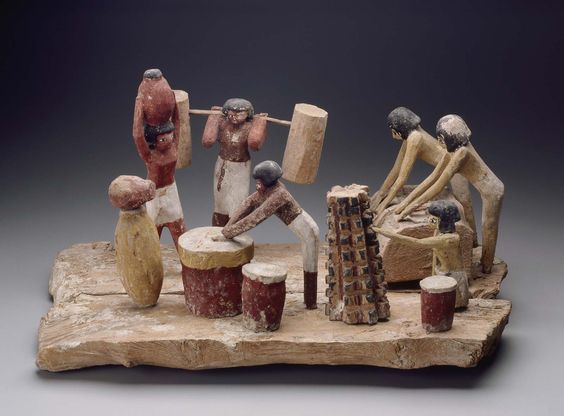 Shellfish – clams and mussels and shrimp – and seaweed were probably important to early humans; they’re very reliable and easy to catch. But they also ate wild nuts and millet and sorghum, roots like yams, and a lot of figs. A lot of their fat came from palm oil, and their sweet food was honey and watermelon, which is native to Africa.

About 6000 BC many Africans started farming millet and sorghum and figs, so they ate more bread and mush after that. They domesticated cattle for meat and milk. They got wheat and barley, sheep and pigs from West Asia and farmed those, too. Egyptians figured out how to keep beehives so they could have more honey, and they may have invented beer.

In the Middle Ages, Africans imported a bunch of new foods from India, especially bananas and rice and chickens, and figured out how to grow them for themselves. Cattle raising spread to South Africa, and in North Africa olive oil became a big part of what people ate. Africans living along the Congo River caught fish and dried them and sold them upstream to East Africa, where they were shipped to India. In exchange, they could buy Indian pepper and sugar and medicines.

When many Africans were enslaved and brought to the Americas to work, they brought with them their recipes and their foodways. Corn mush and peanuts were familiar already. They couldn’t get yams in the Americas, so they used sweet potatoes instead. They brought watermelon seeds with them and grew those, and also black-eyed peas and rice and okra.

But in America, many foodways mixed together, so they also added new foods like potato salad, a German immigrant food using South American potatoes. They ate more pork than before. And, eventually, they ate more Native American foods, like tacos and chili and tomato sauce.

In the last hundred years, more Africans have immigrated to the United States, and they’ve brought new foodways with them too: Ethiopian food, couscous, and much more.

People love to try out new recipes and eat new foods, so they are always changing their cooking. Sometimes they don’t have any choice and have to change what they eat, too. But they also hang on to foods that remind them of their history. Many African-American recipes go back thousands of years.