When did people start to eat honey? 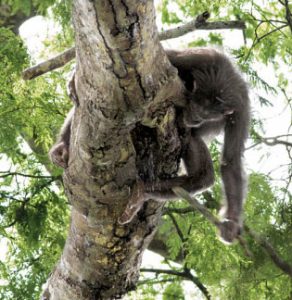 Early history of honey: A chimpanzee smashing a beehive to get honey

When did bees start to make honey?

Bees first began to make honey about 200 million years ago, long before there were any people. So the history of honey goes back a long, long way!

Why do bees make honey?

When did primates start to eat honey?

Primates almost certainly ate wild honey even before they evolved into people, as monkeys do when they can get it. Chimpanzees strip leaves from sticks and then push the sticks into beehives in tree trunks or underground to get the honey.

What else did primates eat?
Did chimpanzees use other tools?

Why was honey such a popular food?

Probably early people in Africa also used sticks to scoop honey out of beehives. Honey is a great source of carbohydrates, plus it tastes delicious! In addition, you can use honey to preserve food so it won’t go bad.

How did people collect honey?

When people first left Africa, about 60,000 BC, they kept on looking for wild beehives and getting the honey out of them. People were collecting honey in Europe using baskets or hollow gourds by at least 8000 BC.

When did people start to make baskets? 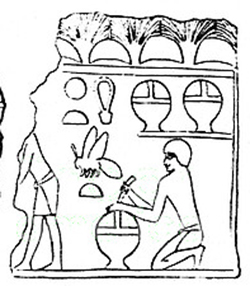 When did people start to keep bees?

Climbing trees to get honey is dangerous and difficult, and that made honey very expensive. At some point, people began to capture beehives by taking home sections of hollow logs that had beehives inside them.

People were keeping bees by making clay beehives for them to live in by the time of Old Kingdom Egypt, in 2400 BC. That’s in the north-eastern corner of Africa.

Keeping your own bees was a lot easier!

Buying honey at the store

But by this time, most people probably weren’t even keeping their own bees. They bought honey at the store, or got it as a gift from their boss or their governor. Bee-keepers were mostly professionals, as they are today – trained slaves working on big honey farms with hundreds of hives, often owned by the government.

Did you find out what you wanted to know about the early history of honey? Let us know in the comments!

Learn by doing: dip apple slices in honey for a great snack
More about honey

Bibliography and further reading about the early history of honey:

Check out this Smithsonian article about early uses of honey