Where does palm oil come from? Africa 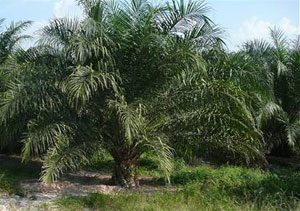 Palm trees first began to grow in 100 million years ago, just before the dinosaurs died out. Palm trees aren’t really trees at all. They’re more like a kind of giant grass that grows along the banks of rivers. 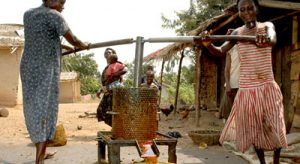 People have probably been pressing palm fruit for the oil since the first modern people moved into West Africa, about two million years ago. By about 4000 BC, people in West Africa were certainly pressing the fruit of the palm tree to get the oil. They liked palm oil because it had a lot of fat in it, and people need fat to live. Palm oil, like other fats, also makes your food taste good if you fry it in the oil. For instance, you can use palm oil with yams and eggs to make eto. Eto was a very common food in West Africa. 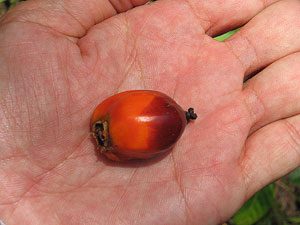 The fruit of the palm tree (what you press for oil)

By 3000 BC, and probably even earlier, traders were carrying palm oil east from West Africa to Egypt and other parts of Africa to sell there. Someone buried a pot full of imported palm oil in an Old Kingdom tomb at Abydos in Egypt. Traders continued to trade palm oil between West Africa and East Africa right up to 1500 AD and even to modern times. However, in North Africa, including in Egypt, most people used olive oil, so they didn’t import a lot of palm oil.